A question for those who get professional massages

NSFW Forums: Massage, Health, Underwear, Underpanties, Massage Protocol
Email this Topic • Print this Page
Reply Tue 23 Nov, 2010 09:46 pm
Do you leave your panties on? i know this sounds a silly question, but I am serious.

But, were I to get a full body massage, would I keep the panties on or take them off?

I take mine off and lay face-down as I await the masseur or masseuse. On entering the room, he or she will take a towel and cover whatever they want temporarily covered. Later, they'll move the towel elsewhere whenever they start working on a currently-covered place.

Full disclosure: This may be one of those situations where I inadvertently commit a gaffe, being a European and much more comfortable with nudity than the average American seems to be. The masseur or masseuse, in turn, may be too deeply invested in a customer-is-king mindset to say something. As best I can tell from body language and mimics, though, that doesn't seem to be the case. Nevertheless, you may want to take my account with a grain of salt.
0 Replies
3
Reply Wed 24 Nov, 2010 02:20 am
This time of year I tend to wear a mankini as the undergarment of choice.

To help facilitate a good massage, I simply take it off in the changing room and then put it on backwards.


My massuse is a lovely woman and her intruction to me is to disrobe, leave underwear on then lie facedown on the table. she then leaves the room giving me 5 mins to get comfortable. then into it.

0 Replies
1
Reply Wed 24 Nov, 2010 06:26 am
I've never taken my panties off during a full body massage - I've mostly availed them at a spa and once at a gym. I don't remember a masseuse ever asking me to take them off - though they'd sometimes pull the panty down my bums a little to massage that area (sorry to be so graphic!).

One grown woman once told me she'd been asked to take hers off. And if I remember correctly, she wasn't too happy about it.

So I guess it's not a big deal if you take them off - just a matter of whether you're comfortable with it.

I never thought about it, but I think I might be uncomfortable to be completely naked during a massage session. Maybe I should try doing it to see how it feels.

I keep my hat on.

Do they disinfect the table after the last vict er, client?

David
0 Replies
2
Reply Wed 24 Nov, 2010 01:23 pm
Whether or not you completely undress is optional and should be dependent upon your sensibilities not the person giving you the massage.

A professional masseuse or masseur at a respectable spa will have no problem giving you a massage and keeping you appropriately draped.
1 Reply
0
Reply Wed 24 Nov, 2010 05:29 pm
@Finn dAbuzz,
It's astounding that the question would even have to be asked - never once did I imagine a professional masseur would expect to have clients appear all dressed up and expect to get a massage while fully clothed. Might as well go to a dentist and refuse to open your mouth on grounds of modesty. Incredible.
1 Reply
1
Reply Wed 24 Nov, 2010 08:56 pm
I read Spidey's post and thought "This is getting good!"
Then OmSigDavid posted and it's been all downhill from there.
(Except for you of course, HighSeas.)
0 Replies
1
Reply Wed 24 Nov, 2010 09:39 pm
@littlek,
I guess it depends what sort of full body, if it's relaxation massage then I think it's totally your choice, but if you were getting your glutes/hamstrings seriously done you want underwear off or it will get oily (and the tugging will get uncomfortable).

Professional masseurs/euses are so good with those towels it's like a fan dance. Bottom line is the masseur will always defer to what you're comfortable with. I feel less exposed buck naked for a massage then I would in a hospital gown: 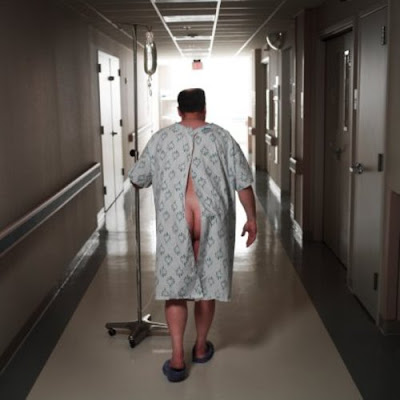 0 Replies
1
Reply Wed 24 Nov, 2010 11:16 pm
@High Seas,
Chair massages are given in malls all the time to the fully clothed, but I understand what you are saying High Seas. I have been given a choice before, but always get completely undressed.
0 Replies
1
Reply Thu 2 Dec, 2010 04:49 am
I have had a few professional massages, usually with panties left on. I asked once and masseuse said it did not matter. Whatever I felt comfortable with.
1 Reply
0
Reply Tue 7 Jul, 2020 12:32 pm
@NettieK,
If it is a female doing the massage, I usually ask if I should remove my boxer briefs. If it is a male, I remove them.
1 Reply