Forums: Music, Disney, Jiminy Cricket
Email this Topic • Print this Page
Reply Mon 22 Nov, 2010 04:19 pm
When we were kids we had a children's album with a variety of song stories on it. The transition between stories was done by Jiminy Cricket. The premise was he was taking you to various "lands". He would say "Now, close your eyes...." and off we would go to Frontierland etc. A couple of songs I remember were the Davy Crockett theme and "The Liberty Tree" from Johnny Tremaine. I have been searching for this album for years. None of us remembers the title of the album or the cover. If anyone can shed some light on the title and cover, I w0uld really appreciate it. Even better if you know where to purchase this old album or if it has ever been re-released on CD. Thank you!
Type: Question • Score: 0 • Views: 3,092 • Replies: 5
No top replies
2
Reply Mon 22 Nov, 2010 04:36 pm
It kind of sounds like it could be this album: 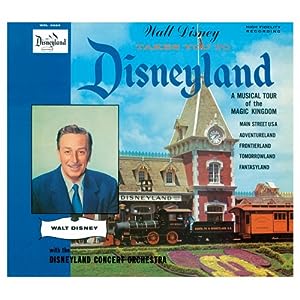 From one of the reviews:

On my first trip to Disneyland, my parents bought me an album, narrated by Walt Disney and Jiminy Cricket, featuring a musical tour of Disneyland. As I grew bigger (but never grew up!), this album remained a favorite. As I got married and had children, they enjoyed it as well.

0 Replies
1
Reply Tue 23 Nov, 2010 08:59 am
@boomerang,
No, it's not this one. I bought this already. The music is good and hearing Walt narrate is great, but it is not the one. Thanks for trying!
0 Replies
1
Reply Tue 23 Nov, 2010 09:25 am
I found this site that has a lot of info on Disney albums. It doesn't list the songs on each but maybe one of the album covers will ring a bell: http://www.pacificsites.com/~drhoades/library.htm

It was "A Day at Disneyland with Walt Disney and Jiminy Cricket [ST-3901]" from 1957. It comes in a large cardboard record sleeve with a 4 page insert. I'm not sure why, but the middle page (which is two pieces of thick cardboard) also has a couple of extra pieces of cardboard glued inside to make it even stronger (and thicker).
Side One has 1) Horse car ride down Main Street U.S.A. and 2) A boat ride thru Adventureland. Side Two has 1) Exploring Frontierland, 2) Space Ship Visit to Tomorrowland and 3) Fun in Fantasyland. 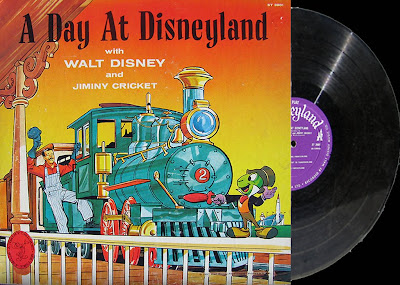