Forums: Economy, Economics, Conflicting Views
Email this Topic • Print this Page
Reply Sat 21 Mar, 2009 06:15 am
The Black-Scholes model of the market for an equity makes the following explicit assumptions:

1) It is possible to borrow and lend cash at a known constant risk-free interest rate.

2) Marginal (diminishing) utility, u(s), is such that:

i) It is independent of first-unit demand.

iii) The integral of u(s) from zero to infinity is finite.

i) Value changes each day by a proportion (called 1+εj, with j denoting
the day), of the previous day's value.

ii) In the long run, the εj's may be considered random as they are not
directly related to each other nor are they uniquely a function of
value.

iii) The εj's are taken from an unspecified distribution with a finite
mean and a non-zero, finite variance.

Read my Simplified Exposition of Axiomatic Economics for a more detailed, but still undergraduate-level discussion of my economic theory. This paper requires knowledge of multi-variable calculus, but omits the real analysis that plagues readers of my 1999 book.
Type: Discussion • Score: 0 • Views: 5,862 • Replies: 10
No top replies
2
Reply Thu 9 Apr, 2009 09:46 pm
@Onion Eater,
I'm of the opinion that Kropotkin trumps Aguilar.

I'm of the opinion that Kropotkin trumps Aguilar.

I see that you got banned at the Political Forum. Apparently, I wasn't the only one disgusted with your feces flinging.

But you have learned nothing from these defeats.

Like a juvenile delinquent who drops a turd in the punchbowl at every party he attends, you insist on dropping Kropotkin's name in threads that have absolutely nothing to do with some obscure Russian communist.

On only your third post, you are already up to the same tricks that have gotten you banned elsewhere. It will be interesting to see how long you survive at Conflicting Views, feces flinger.
2 Replies
1
Reply Fri 15 May, 2009 06:19 pm
@Onion Eater,
Onion Eater;65248 wrote:

I see that you got banned at the Political Forum. Apparently, I wasn't the only one disgusted with your feces flinging.

Son, I wouldn't talk **** about something you know nothing about. To ensure that you don't make this same mistake in the future, I'll try to educate you. I was banned from PoliticalForum because my advocacy of the abolition of age restrictions and integration of those currently labeled "adolescents" into adult society fueled unscrupulous speculation about my alleged sexual interests in children among the moderator panel. Which resulted in such improprieties as this:

This post was made when I attempted to inquire about my ban in the "Disputed Bannings" forum. They spoke candidly there because they were under the impression that the other members would not be aware of their comments. Unfortunately for them, I took a screenshot of this comment and have been distributing it to other members, and can thus claim at least partial responsibility for the current exposure of their corruption that has rocked the forum for the past week or two.

That was a broad general advisory to the thread, not a warning to me specifically.

But you have learned nothing from these defeats.

You've not once defeated me, because I've never had the slightest interest in engaging your "axiomatic" idiocy. I comment on libertarian socialist political economy with an approach that primarily utilizes broad conceptions of civil libertarian and anarchist political theory, as well as some minor dabbling in labor economics. You've also not defeated Scucca/Reiver, because his focus is on labor economics and theory of the firm.

Like a juvenile delinquent who drops a turd in the punchbowl at every party he attends, you insist on dropping Kropotkin's name in threads that have absolutely nothing to do with some obscure Russian communist.

I've mentioned Kropotkin precisely twice, the purpose of the mention this latter time admittedly being to prod you a bit. That pales in comparison to your shameless harlotry in constantly spamming every forum you go to with links to your website. The fact that Kropotkin was mentioned by another poster independently of me is due to the fact that you attempted to make inappropriate remarks about socialist political economy to the fact that state capitalism was "socialist" in nature, or that socialism necessitated centralized and hierarchical planning. Kroptkin's anarcho-communism merely provides an obvious counter to this claim.

On only your third post, you are already up to the same tricks that have gotten you banned elsewhere. It will be interesting to see how long you survive at Conflicting Views, feces flinger.

Your posts at least provide comic relief, if nothing else. :rollinglaugh:

Since you're such an expert, why not take a step back and have a stab at rebutting my comments about the conflicts between fascism and socialism that I posted in the thread devoted to that topic, since you apparently subscribe to the "state capitalism = socialism" school?
2 Replies
0
Reply Tue 19 May, 2009 12:56 am
@Agnapostate cv,
Agnapostate;65249 wrote:

I was banned from PoliticalForum because my advocacy of the abolition of age restrictions and integration of those currently labeled "adolescents" into adult society.

If you ever call me "son" to my face, I will twist your neck, pervert.

I'd never imagined that your delusional idiocy extended outside of the economic realm. :rollinglaugh:
0 Replies
1
Reply Fri 6 Aug, 2010 07:30 am
@Onion Eater,
Victor Aguilar, you're a joke.

You're a correct-line ideologue who pretends (falsely) to have a commitment to the free exchange of criticism and rebuttal - but 'fling feces' (calling people 'Nazi' and 'fascist' under a spew-donym like a coward) the moment you look like losing an argument.

In this, you're like Marx - academically an also-ran (who published your 'magnum opus'?) and vitriolic towards anyone who refuses to acknowledge your self-proclaimed genius.

PS - I have no qualms about using nyms in order to avoid detection of activities that the parasitic political class don't like - but to use a nym to spew bile (hiding in a hole where you hope you can get away with it) is the most chicken-hearted gutless display I've ever seen. No wonder you get all hard for snipers... another gutless pack of cowards.
0 Replies
1
Reply Fri 6 Aug, 2010 10:14 am
@Agnapostate cv,
Yo, Agnapostate.

Spamming is right - like all purveyors of asses' wool, our chum Aguilar has to try nd whore his vanity-published screed in every dank hole on the intertubes.

He picked the wrong guy in this instance - I am going to follow him like a bad smell, and tear bleeding chunks off his soi-disant 'revolutionary theory' as I do so.

I'm currently trying to figure out where (or if) the guy did his grad study: mine was at an institution with an Econometrics department that ranked 4th in the world in standardised page count when I was there, so I am comfortable in the academic name-calling business.

It will be fun - I haven't done this since the old "hunt the anti-mason and make his life miserable" days of the mid-90s.

Looks like I'm too late - the Misesians tore him a new bunghole.

I'm currently trying to figure out where (or if) the guy did his grad study: mine was at an institution with an Econometrics department that ranked 4th in the world ....


This is the first I hear of Mr (Professor?) Aguilar, or of you, Mr (Professor? Dr?) Transom, but since the title here attracted my attention I've a couple of questions for either of you, or of course for anyone else who can provide an answer. Q1 is - are these the axioms mentioned on the original post on this thread - it's hardly possible to discern them from the botched cut'n'paste here, and, Q2, if those are indeed the 3 axioms, esp. conditioned on continuous differentiation of all variables (with the sole exception of Cauchy, judging by a very cursory look at the constraints on the links given) then why don't you, in view of your stated background and prior knowledge of Mr/Prof Aguilar, proceed to show this mathematically? You may care to refer to Ken Arrow, who demonstrated the inherent implausibility of similar constructs at least as far back as the 1950s, or, more recently, to the late Fischer Black. 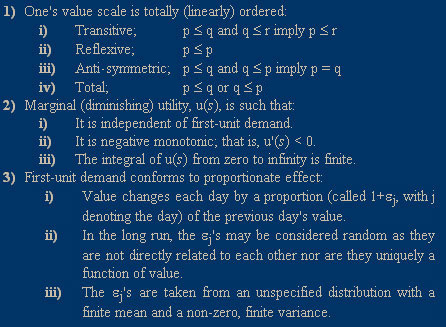 0 Replies
1
Reply Sun 8 Aug, 2010 09:46 am
@GeoffreyTransom,
That's in case you come back with the results of your investigation - just looked at the link to von Mises thread and read last comment there, signed by the moderator, locking the thread after 5 or 6 incarnations of Mr Victor Aguilar:
http://mises.org/Community/forums/t/1430.aspx?PageIndex=2
That was over 2 years ago. It's a bit surprising that these new (and newly incoherent) posts on Black-Scholes etc should be appearing on A2K but they seem to have been carried over from another forum - am not clear which one.
0 Replies
1
Reply Sat 16 Jul, 2016 02:07 pm
@Onion Eater,
Several people associated with Black-Scholes (its discovery and formulation) lost their shirt following it in the market.

As to CRA, yes, that was Clinton and it helped destroy the housing marked. Big banks went into depressed areas made loans they knew were bad, wrote them off (as being at least cheaper than a CFPB fine), and drove the longtime community lenders out of those areas. I worked as a bank analyst and watched it happen.