Forums: Internet, Daily Show, Jon Stewart, New York Magazine, Chatroulette
Email this Topic • Print this Page
Reply Fri 5 Mar, 2010 06:01 am
Did anyone see the last night's Daily Show Report on the media frenzy or reporting on the alleged tech crazed trend of Chatroulette? One of the sidesplittingly funniest reports ever produced for the show.

I'll drop a link to the video when they post it up today.

For those unfamiliar with this latest thing du jour:

The Human Shuffle
Is ChatRoulette the future of the Internet or its distant past?

The first time I entered ChatRoulette"a new website that brings you face-to-face, via webcam, with an endless stream of random strangers all over the world"I was primed for a full-on Walt Whitman experience: an ecstatic surrender to the miraculous variety and abundance of humankind. The site was only a few months old, but its population was beginning to explode in a way that suggested serious viral potential: 300 users in December had grown to 10,000 by the beginning of February. Although big media outlets had yet to cover it, smallish blogs were full of huzzahs. The blog Asylum called ChatRoulette its favorite site since YouTube; another, The Frisky, called it “the Holy Grail of all Internet fun.”

Read more: Is ChatRoulette the Future of the Internet or Its Distant Past? -- New York Magazine
For the remainder of the story ....
http://nymag.com/news/media/63663/#ixzz0hIpbWZ50 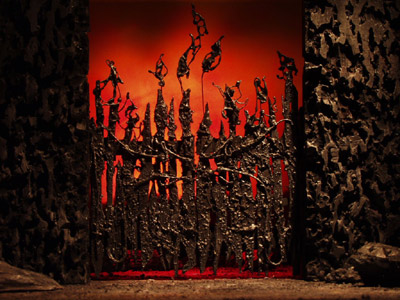 No, I'm not naked... and I find the naked folk just "Next" me when they see my old face with clothing on, which is fine (great, actually) with me.

I tried it yesterday and today, both. I was able to "chat" with several people from NYC, Holland, and Finland.

I really like that! I always laugh while on the site... people seem surprised to see an old lady (MOL) like me, but the ones who are willing to talk are the very same ones I want to talk to.

Founder Andrey Ternovskiy, a Russian teenager who created the site for his friends, will be on hand to accept the honor.

By combining video-chatting technology and randomization, ChatRoulette pairs users from all over the world in arbitrary video conversations, creating an new type of online experience that can be both thrilling and exhausting. Described by New York magazine as "one of those gloriously simple ideas that manages to harness the crazy power of the Internet in a potentially revolutionary way," Chatroulette.com now boasts tens of thousands of users online at any given moment .

"ChatRoulette's success offers a refreshing reminder that the Internet still offers a level playing field where anyone with a great idea or product can flourish," said David-Michel Davies, executive director of The Webby Awards. "The product of a simple yet utterly original idea, launched without any concern for profit or growth, ChatRoulette embodies the sort of accidental innovation that only the Internet can produce.