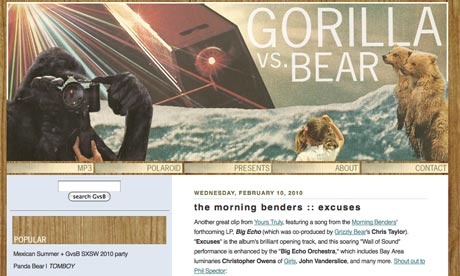 Music blog Gorilla Vs Bear was concerned by Google's actions

In what critics are calling "musicblogocide 2010", Google has deleted at least six popular music blogs that it claims violated copyright law. These sites, hosted by Google's Blogger and Blogspot services, received notices only after their sites " and years of archives " were wiped from the internet.

"We'd like to inform you that we've received another complaint regarding your blog," begins the cheerful letter received by each of the owners of Pop Tarts, Masala, I Rock Cleveland, To Die By Your Side, It's a Rap and Living Ears. All of these are music-blogs " sites that write about music and post MP3s of what they are discussing. "Upon review of your account, we've noted that your blog has repeatedly violated Blogger's Terms of Service ... [and] we've been forced to remove your blog. Thank you for your understanding."

Jolly as Google may be, none of the bloggers who received these notices are "understanding" in the least. Although such sites once operated on the internet's fringes, almost exclusively posting songs without permission, many blogs are now wined, dined and even paid (via advertising) by record labels. After the success of blog-buzzy acts such as Arcade Fire, Lily Allen and Vampire Weekend, entire PR firms are dedicated to courting armchair DJs and amateur critics.

Despite the de facto alliance between labels and blogs, not all of the record companies' legal teams have received the message. In a complaint posted to Google Support, Bill Lipold, the owner of I Rock Cleveland, cited four cases in the past year when he had received copyright violation notices for songs he was legally entitled to post. Tracks by Jay Reatard, Nadja, BLK JKS and Spindrift all attracted complaints under the USA's Digital Millennium Copyright Act, even when the respective MP3s were official promo tracks. As a publicist for BLK JKS' label, Secretly Canadian, told Lipold: "Apparently DMCA operate on their own set of odd rules, as they even requested that the BLK JKS' official blog remove the song." It's not clear who "DMCA" is in this case, as the act does not defend itself.

"I assure you that everything I've posted for, let's say, the past two years, has either been provided by a promotional company, came directly from the record label, or came directly from the artist," Lipold wrote to Google.
The company's first official response came only late yesterday, as #Musicblogocide2k10 sped up Twitter's trending charts. "When we receive multiple DMCA complaints about the same blog, and have no indication that the offending content is being used in an authorised manner, we will remove the blog," explained product manager Rick Klau. "[If] this is the result of miscommunication by staff at the record label, or confusion over which MP3s are 'official' ... it is imperative that you file a DMCA counter-claim so we know you have the right to the music in question."

The trouble with filing a formal, legal DMCA counter-claim is, that most bloggers don't know how. What's more, many of Blogger's DMCA notices allegedly omit the name of the offending song. Bloggers aren't even sure what they are denying.
Take the case of Masala, co-founded by Guillaume Decouflet in mid-2005. Together with his partners, Decouflet has introduced hundreds of thousands of readers to underground genres such as kuduro and funk carioca. Masala's writers weren't typical music bloggers, waxing lyrical about Neon Indian and the new Phoenix remix: mostly DJs, they shared South African electronica, Japanese dancehall, UK funky and Senegalese hip-hop. "We haven't been posting any Whitney Houston or anything," Decouflet explained. He only recalls receiving one DMCA notice " ever " from Blogger. As this email did not name the offending song, he says he doesn't know what caused the complaint. Masala's bloggers responded to Google's email, Decouflet insists, but never heard back. That is, until their entire site " and more than four years of archives " were deleted this week.

"It's just sad because we were documenting young people's music from all around the globe," Decouflet said. "For a lot of people, it was music they wouldn't have been able to discover elsewhere." Decouflet is now trying to "salvage" the Masala archive, using Google's own Reader tool to dig up old posts. Other banished blogs have taken similar steps. Living Ears, It's a Rap and Pop Tarts have relaunched at new URLs, generally without any older material.

Not all music blogs are as innocent as I Love Cleveland and Masala. Although the majority of bloggers share only single songs, showing particular affection for the obscure and out of print, some blogs are the most banal sort of pirates " offering links to download entire new releases. However, these sites are ostracised by the blogging mainstream, left off aggregators such as the Hype Machine. No one protests when Google quietly removes their Blogspot accounts and yet ironically, amid the "musicblogocide", dozens of these still remain online.

The two largest Blogspot-hosted music blogs, Gorilla vs Bear and My Old Kentucky Home, show no sign of being affected, although they will still find these developments alarming. "I don't post anything that's not approved, and obviously nothing on major labels," said Gorilla vs Bear's Chris Cantalini. "But apparently that doesn't matter in some of these cases."

In a press release last year, Google seemed to recognise this distinction, announcing a new policy vis-a-vis music bloggers. From now on, it wrote, DMCA notices would not result in the instant deletion of offending blogs. Instead, individual posts would be temporarily removed, with a prominent notice to help bloggers respond to the allegations. "Music bloggers are a large segment of our users " and we know that for those who've received one or more DMCA complaints in the past, this may have been a frustrating experience," Klau wrote in August. Almost six months later, the experience doesn't appear to have become any less frustrating.

Type: Discussion • Score: 4 • Views: 16,688 • Replies: 3
No top replies
1
Reply Thu 11 Feb, 2010 07:34 am
@djjd62,
Do people pay to use the blog that was shut down, or is it a free service?
1 Reply
1
Reply Mon 15 Feb, 2010 01:43 am
@rosborne979,
It's free, but it doesn't matter because Google would have to follow the DMCA either way. They correctly point out that the bloggers must file a DCMA counter-claim to keep the content online at which point it can become the court's job to decide. But absent the counter-claim Google's obligations under the DMCA law is to remove the content promptly.

In the past Google has restored content after a counter-claim was filed, and if they have the legal right to post the music that is how they can get it back online. If not then they should complain about the overly-broad DMCA law and not Google following it.
1 Reply
1
Reply Mon 15 Feb, 2010 08:38 am
@Robert Gentel,
I was going to point out that if something is free, then they don't have much of a right to complain if it shuts down. Kind of like Abuzz.