Hail Librarian! Or Anyone!1600 CDs and Video Tapes

Forums: Collecting, Organization, Cds, Tapes
Email this Topic • Print this Page
Reply Sat 6 Feb, 2010 02:35 pm
Think about how you put your own collection of CDs in order (or whatever passes for order) and describe it here.

A friend, no, really, a friend of mine has this huge collection of CDs, reel to reel tapes and video tapes. He doesn't have a clue on where to start organizing it. Mostly music, maybe 200 movies.

Joe(it is NOT me.)Nation
Type: Question • Score: 7 • Views: 1,690 • Replies: 10
No top replies
1
Reply Sat 6 Feb, 2010 04:17 pm
@Joe Nation,
I cut all my old tapes onto cd's and have them in separate jewel boxes. I built a large cd cabinet out of walnut with poplar shelves. Painted the shelves in whole blocks of colors for specific music groups.
My largest category is "other"(like new age, or metal, or folk, or comedy)
Classical
Jazz
Country
Rock
Big Band
World Music.
Thats p;retty much all the colors I could stand next to each other. Color just allows you to stick a Cd in a category knowing that you wont have to spend all day looking for it.

I have a friend who has just stuck all his CD's onto a hard rive and has to look up on his computer, Too techy for me. I like the tactile of the analog world.

One, separate music CDs from everything else. You don't want your software and movies mixed up with music uploads. Now, how you catalogue the music is a matter of personal preference. My own method has always been to sparate genres first, then alphabetize within the genre. I sort my jazz albums alphabetically by artist, my classical albums alphabetically by composer. Something similar can be worked out for DVDs (although back in the Pleistocene days of VCRs, I shelved my tapes alphabetically by movie title, regardless of any other consideration.)

makes storage so much easier

Comedy; Costume Drama; Documentary; Drama; Foreign Language; Historical Drama; Science Fiction; etc....
0 Replies
1
Reply Sun 7 Feb, 2010 05:09 pm
I really appreciate everyone's answers here. A friend and I were discussing the jumbled up stacks of my CDs and I said I was going to put them back in order. He asked what order? That started a long conversation about the best way to order them with him using the genre method and me saying essentially "It doesn't work for me." because:
1) I hate trying to figure out what genre a particular CD is (classical rock,rock, hard rock, 60's acid, hip hop,rap, pop,jazz, funk,folk, country folk, crossover?) and 2) because when I am looking for a particular artist, I don't want to have to wonder which section he or she is in (Is Bocelli in Opera, Sacred Music or Easy Listening? Is James Taylor in Folk music? Really? With Ronny Gilbert and Doc Watson?)

He suggested I ask you.

You guys agree with him. (sigh) So he wins.

All of mine are in alphabetical order by Artist Last Name or First Word of a Band name. The Beatles are under 'B', John Lennon's solo Albums are under 'L'.


Of course, it's your system so you get to decide what genre everything is OR you can always look at what your software thinks the genre is (and every system seems to have opinions on that sort of thing) when you burn the c.d's to your hard drive so you can sell them.
0 Replies
1
Reply Sun 7 Feb, 2010 05:19 pm
@Joe Nation,
If you don't want to classify all of them, just look at their vendor classification. Just about every type of music has been classified by I-tunes, et al. Same for movies.
0 Replies
1
Reply Sun 7 Feb, 2010 06:00 pm
0 Replies
1
Reply Mon 8 Feb, 2010 08:13 am
Vendor classification is near the top of the list if things I do not wish to learn. Let's see ...Leo Kottke.... is he in folk music because he plays a 12-string? or is what he plays on the 12 string something not definable, is it jazz? I'm going to check next time I'm at Barnes and Noble to see how they pigeonhole him.

Rick, my friend, says he can't remember the name of the Pakistani musician who plays these incredible ragas. I said "So you put him where you will remember where you put him." All my stuff like that is under "P" for Putamayo. Yeah, I know, that's filing by Production Company. So sue me. Or I put it him in a section I call World Music, the incredible Henri Dikongue right next to Orchestre National de Barbes, until I remember the names well enough to put in the alpha-beta stacks.
===
Now I want to start something:
It occurred to me last night as I was brushing my teeth that I was almost forty before I met a woman who cared about her music collection enough to have it in any kind of order. Let me backup.

Gather 'round children. I come from the days of the '45', sock-ups in the gym and pink carnations. (Yeah, yeah, Cue: American Pie, the song, not the movie.) In those days of yore, the guys I hung around with all wanted to be DJs. This was in the days and nights wherein the disc jockey would actually talk on the radio about the MUSIC they were playing and to do that they were just like the guy in the movie clip above: they knew the song on the 'B' side, they knew who was playing guitar on the record behind the singer, they knew the recording company's name, whether it was Reprise or that new one- Motown- and the producer's name, too.

I'm pretty sure that the contests between the guys at Emerson College's School of Broadcasting in 1965 to come up with the most obscure information about a particular record "Name the Ronettes and who played drums on "Be My Baby''. "(Phil Spector hit, btw), those games, I think, were the true beginnings of Trivial Pursuit.

The days of the talking DJ were incredibly brief, by 1968, all you heard was the weather conditions being read off the telex and the call letters at the top of the hour. meh. (Okay, there may have been local exceptions, but most of the musicoligist Bad Boys were gone.)(The bad boys today talk about farts. Mike and the Morning blah blah just did twenty minutes on beer farts. In 1967, if we had said the word 'farts' we would have been fired. I got three days off once for saying that a particular dance party had been a 'hell of good time'. Pleading that I meant to say 'heck' did no good. I digress.)
The music was still amazing and in our room at Language School in Monterey, we played our albums on the stereo and swapped cuts from Cream, Iron Butterfly and Big Brother. AND, (he finally gets to the important part.) everybody, it was all military males, kept their albums in order by name. Santana right next to Steppenwolf.

Okay. I get out into the real world, that is, the world which has females in it. I go to their homes and apartments. --and there, on the floor or shoved on top of bookcases, are their records. (GAH!)

"How do you find anything?" I say flipping through a stack leaning up against a fireplace.. (Fireplace!! Gah!)
"What do you mean? I just look for something I might like at the moment. See if you can find that brown album with that group, what's their name." 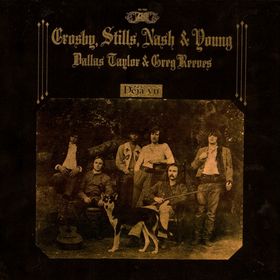 So it went throughout my late twenties and thirties:
males, albums in order, rest of life pretty pigsty-like;
females, mostly together except for the ones I kept marrying and not a clue about where a particular record might be.

"Look in either the blue milkcrate or over in the box of cassettes."

Okay. Now. Was it just me? Or is that how the world is? Like those two up there in the Diner clip. Males, for these purposes only, trying to control the order of the Universe. Females, not a clue about why such things could be important.

0 Replies
2
Reply Mon 8 Feb, 2010 10:54 am
@Joe Nation,
My albums (cds, etc.) have always (decades, decades) been in categories by my own decision making; within the categories, the subcategories re some similarity - as opposed to alphabetical. Plus, near the turntable or cd player, etc., a ministack of recent favorites, for accessibility, say 4 cds in that stack at most.
0 Replies