Forums: Books, Parenting And Childcare, Reading, Childrens Books, Early Readers
Email this Topic • Print this Page
Reply Thu 5 Nov, 2009 11:46 am
My 4 year old daughter is reading at a scary level-- the number of words she now recognizes is pretty large.

The problem is that most of the books that are at her reading skill level have plots that are too complex for her to appreciate. She can read the words of "The Wizard of Oz" just fine, but she isn't ready to be pulled into the story (even when I do the reading).

So-- I am looking for early reading books that have an fairly advanced vocabulary (for a 4 year old) but fairly simple, engrossing stories. The ideal stories would be more then the inane early reader stuff. Something with interesting plots that will help us develop our ability to follow a good story-- but not too complex to keep our attention.

We found (and finished) the Little Bear books (which are great) and we have done as much Dr. Seuss as a poor father can manage...

So please suggest books for us to read together.

When sozlet was reading that, she also really loved the Frog and Toad series and Henry and Mudge:

And Harry the Dirty Dog:

I'll stop for now!
0 Replies
2
Reply Thu 5 Nov, 2009 12:05 pm
@ebrown p,
Little House in The Big Woods by Laura Ingalls Wilder. Each chapter reads like a complete little story but it comes together as a whole world . This book is much less sophisticated than the rest of the series. It is not as icky sweet as the TV series and the father - daughter relationship is lovely. 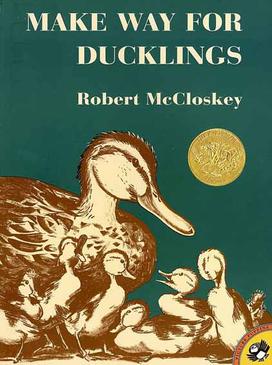 Make Way for Ducklings is a children's picture book written and illustrated by Robert McCloskey. First published in 1941, the book tells the story of a pair of mallard ducks who decide to raise their family on an island in the lagoon in Boston Public Garden, a park in the center of Boston, Massachusetts.

The book deals with Little Sal, who is going blueberry picking with her mother. The story is of a little girl Sal and her mother as they go out into the country to pick blueberries for winter, and a bear and his mother as they go to eat berries for winter from the other side of the same hill. Set in a small town in Maine this picture book piece that uses a single dark blue color and block printing for the illustrations.

Paddle-to-the-Sea is a 1941 children's book, written and illustrated by American author and artist Holling C. Holling. It was recognized as a Caldecott Honor Book in 1942.

At Lake Nipigon, Canada, a boy carves a wooden model of an Indian in a canoe and sets it free to travel the Great Lakes to the Atlantic ocean. The story follows the progress of the little wooden Indian on its journey through all five Great Lakes and the St. Lawrence River. People carve in the bottom of the boat where he has been and then they put him in the water again
1 Reply
1
Reply Thu 5 Nov, 2009 12:42 pm
Some great books my daughter liked as well - some more series I can think of and some other great books:
Charlotte's Web
Katie Kazoo series
Cam Jansen series
Not sure if some of the American Girl series would be too old or not
Boxcar Children series

There are so many - I suggest even going to a bookstore and go to the chapter book/series section - there are tons.

Is it too early for the poems of Shel Silverstein?
http://www.shelsilverstein.com/indexSite.html
1 Reply
2
Reply Thu 5 Nov, 2009 01:30 pm
@tsarstepan,
Oh the giving tree is a great one - although if he is advanced reading when be below her reading level

And this poem is a no-no now with the H1N1

0 Replies
1
Reply Thu 26 Apr, 2012 11:02 pm
@ebrown p,
Have you tried the Little red riding hood adapted by Bertram and boo?
my neice loved that book i think because (1) the multicolored illustrations (2) she could understand the plot (3) it has a happy ending ( girls love happy endings). She read it to me every time i pay her a visit. I think you should try reading the classic fairy tales and then you can slowly introduce the complex stories that we all loved.
0 Replies
1
Reply Mon 11 Mar, 2013 04:00 am
@tsarstepan,
"A Bad Case of Stripes" is best book for children reading.

would like to recommend To Be a Dragonet Is Terrific! by P. Gibey. Not so much complex reading, nice ilustrations as well. Should fit your needs