Forums: Books, Parenting, Pop, Baby X, Gender Roles
Email this Topic • Print this Page
Reply Wed 1 Jul, 2009 06:38 pm
A discussion on Facebook reminded me of a story that my hippie-dippy teacher read to us in ~4th grade: 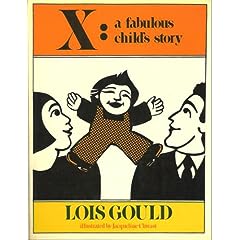 The whole story is here:

Once upon a time, a baby named X was born. This baby was named X so that nobody could tell whether it was a boy or a girl. Its parents could tell, of course, but they couldn't tell anybody else. They couldn't even tell Baby X, at first.

You see, it was all part of a very important Secret Scientific Xperiment, known officially as Project Baby X. The smartest scientists had set up this Xperiment at a cost of Xactly 23 billion dollars and 72 cents, which might seem like a lot for just one baby, even a very important Xperimental baby. But when you remember the prices of things like strained carrots and stuffed bunnies, and popcorn for the movies and booster shots for camp, let alone 28 shiny quarters from the tooth fairy, you begin to see how it adds up.

This came up because one old classmate of mine posted this story... 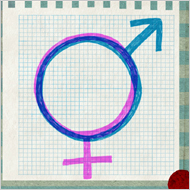 During last week’s discussion of whether couples choose to learn the sex of their baby before he or she is born, a number of you said you wanted to keep the secret as long as possible, because the moment people hear “boy” or “girl” they begin to make assumptions about a child.

One couple in Sweden decided to take that logic a few steps further, and are refusing to tell anyone whether their toddler is a boy or a girl.

...and another old classmate said that it reminded him of Baby X. I vaguely remembered the story and tracked it down.

What do you think of it all?
Type: Discussion • Score: 0 • Views: 4,563 • Replies: 4
No top replies
1
Reply Wed 1 Jul, 2009 06:44 pm
I intend to go read your links but thought I would mention that my brother used to introduce me as his little brother for years and years and years until there was no longer any hiding the fact that I was a girl.

Being his little brother got me access to places girls couldn't go.

It helped that I had what was at the time considered to be a boy's name (my brother named me). When I started looking like a girl everyone started calling me something else.
1 Reply
1
Reply Wed 1 Jul, 2009 08:13 pm
I read the second link and I have to agree with the poster who noted that gender isn't a social construct, it's a biological fact.

I'm betting dollars to donuts that Pop is a girl simply because I think parents of girls worry about this stuff a whole lot more than parents of boys.

0 Replies
1
Reply Fri 3 Jul, 2009 03:14 pm
@boomerang,
Thanks for replying, boomer! Have been super-busy since posting and haven't had time to come back to this to post something thoughtful.

A quickie I wanted to put here though (until such time as I CAN post something thoughtful...) Yesterday sozlet had three friends over, all girls. They did this and that and a while into things they started wrestling in the living room. I was worried about them cracking their heads against various pointy parts of the room and so sent them outside. They then wrestled for the next half hour or so, in pairs. One pair would go at each other while the other pair acted as refs/ commentators.

They were really going all-out -- there were rules against hair-pulling, eye-gouging, and tickling, but otherwise pretty much anything went. (I usually let them do their thing and don't pay much attention but they were really whaling on each other so I wanted to keep an eye on things, both to put a stop to it if it seemed to get out of hand and so I would know what happened for after-the-fact disentangling [who did what to whom], if something did go wrong.) As they tussled, I thought "girls will be girls" and then thought of this thread.

(No injuries, thank goodness, though one girl burst into tears when pinned. Overall everyone had a great time.)
0 Replies
1
Reply Fri 3 Jul, 2009 08:23 pm
Its not fair....mumpad wont wrestle me.

and if i make her wrestle she just gives up.

she is SUCH a girl!
0 Replies