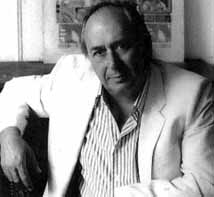 James Graham Ballard (born 15 November 1930 in the International Settlement in Shanghai, China, Died 19 April 2009) is a British novelist and short story writer. He was a prominent member of the New Wave in science fiction. His best known books are the controversial Crash, and the autobiographical novel Empire of the Sun, both of which have been adapted to film.

to be honest i wasn't a huge fan, but did read some of his sci fi short stories in various collections

it's still sad whenever an artists passes