Bridge Loan Denied: WTF is wrong with these guys?

Forums: Economy, Autos, News, Politics, Recession
Email this Topic • Print this Page
2
Reply Fri 12 Dec, 2008 10:05 am
@Bella Dea,
I'd rather pay unemployment to these workers than prop up a failed business and destroy what's left of the free market that has helped this country become the richest in the world.
0 Replies
2
Reply Fri 12 Dec, 2008 10:06 am
@maporsche,
Ok, so since we've already given the banks millions of dollars that are STILL being squandered, where is the outrage within the Senate? It isn't one because it doesn't directly effect their ability to be reelected.

Tell me why no one has mentioned ANYTHING about the squandering of the money just loaned to AIG and Citi?
1 Reply
1
Reply Fri 12 Dec, 2008 10:08 am
@maporsche,
I do see a problem with that. But what is being proposed now is to just let the companies collapse.

They need help. They need to change.

The idea that they would get some money now and more later if they proved they were making change was a fantastic idea.

Why didn't it happen?
0 Replies
1
Reply Fri 12 Dec, 2008 10:08 am
@Bella Dea,
You aren't listening then Bella. People (voters) ARE complaining. Do a quick search here are you'll see it plain as day (unless you've voted down those topics).

In the meantime they need to build up their war chests for the future.

It's my belief, and I'll admit that I don't understand it all either (but economics is my college major), that this and the other bailouts will only serve as a short term fix for these people. The impact that these decisions will have on our economy 5/10/20 years from now could be much more devastating.

...All the unions had to do in order to get the Republicans to go for this $15 billion bailout was to promise to reduce union wages to the level paid to automakers in the Toyota and Nissan plants by the end of 2009. No way. They weren't going for it. So now GM has hired bankruptcy council...

0 Replies
0
Reply Fri 12 Dec, 2008 02:02 pm
The government, courtesy of a DEMOCRAT controlled Congress, though there are plenty of Republicans who will have to carry some blame for this, has now obligated every single man, woman, child, geezer, infant in the USA with $3,000 in bailout obligation and want to increase that. If you take out the non taxpayers, it is more like $5 to $6 thousand for each of us. That's not families. It's individuals.

So they authorize $700 billion to keep the banks afloat, free up credit, and get things going again. But with collapse of the financial structures imminent, it was some time before money started flowing. We didn't collapse. And now they tell us that the lending institutions have used that money for other things and credit is still frozen.

Bank of America received a huge chunk of the bailout money, even without being in crisis, and they now announce that they are laying off 10% of their work force or 30,000 people and credit is still frozen. What did we get for all that money?

More and more businesses are declaring bankruptcy. I just saw on the news this morning that KB Toys are closing all their stores nationwide BEFORE Christmas and there goes 10's of thousands more jobs. We will see a large number of bankruptcies filed immediately after Christmas after stores have dumped most of their inventories at below cost.

We aren't getting our money's worth folks. Most of our elected leaders have no clue what they are doing and it is time to put an end to this nonsense of government "bailouts" before they do manage to completely destroy the most inventive and successful financial structure in the world. If we don't stop now, we will have a socialist government owning much of the nation's businesses that will be worth nothing.
1 Reply
1
Reply Fri 12 Dec, 2008 02:16 pm
@Foxfyre, 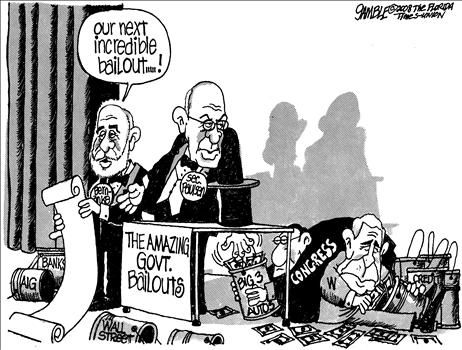 Their hourly pay, their retirement benefits, and their other benefits combine to $73/hour.

THAT is how business measures compensation costs, they have to include everything that the employee receives.

Between November 11 and December 4, as Congress has considered a potential bailout for the auto industry, Media Matters for America has found dozens of media figures and outlets advancing the falsehood that autoworkers employed by the domestic automakers are paid $70 or more per hour in wages and benefits, some using it to blame autoworkers for the domestic auto industry's financial straits. The false assertions echo automakers' claims during the 2007 contract negotiations that union workers receive $70 or more per hour in wages and benefits. However, GM recently has reportedly pointed out that the figure representing the hourly cost of labor to U.S. automakers -- a cost that GM reportedly puts at $69 -- includes not only current workers' hourly wages and benefits, such as health care and retirement, but also retirement and health-care benefits that U.S. automakers are providing for current retirees, as Media Matters has noted. Despite the automakers' acknowledgement, the media continue to repeat the $70 or more per hour myth.

I have a hard time understanding how the CEO's of companies and other top management absolutely cannot have their contracts legally voided as a condition of their bailouts, yet most have no problem with changing the contracts signed by these autoworkers and the things guaranteed to them.

On one hand I'm happy the bailout didn't go through, on the other, I'm pissed that Harry Reid has just accepted that you need 60 voted for EVERYTHING in the Senate. I wish he'd start making the Republicans actually ******* filibuster again.

Cycloptichorn
1 Reply
2
Reply Fri 12 Dec, 2008 03:26 pm
@Cycloptichorn,
Cyclops, I don't know why we should exclude the retirement packages for current retirees. This is a cost that GM has to incur.

I have always understood that Joe Blow the headlight installer doesn't make $73/hour. But that doesn't change the fact that GM has to pay $73 in employee costs for every hour of production that it's workers produce.

And like I said in subsequent posts to the one you quoted, Joe Blow the headlight installer DOES still make 45% more than his Toyota counterpart, in real hourly pay/benefits.

Just because Toyota doesn't have a these costs (probably due to smarter management decisions, or the lack of the UAW) doesn't mean that you can simply choose to ignore them on the GM side.
1 Reply
1
Reply Fri 12 Dec, 2008 03:34 pm
@maporsche,
maporsche wrote:

Cyclops, I don't know why we should exclude the retirement packages for current retirees. This is a cost that GM has to incur.

I have always understood that Joe Blow the headlight installer doesn't make $73/hour. But that doesn't change the fact that GM has to pay $73 in employee costs for every hour of production that it's workers produce.

And like I said in subsequent posts to the one you quoted, Joe Blow the headlight installer DOES still make 45% more than his Toyota counterpart, in real hourly pay/benefits.

Just because Toyota doesn't have a these costs (probably due to smarter management decisions, or the lack of the UAW) doesn't mean that you can simply choose to ignore them on the GM side.


You conveniently forget that much of the 'employee costs' come from being in business twice or three times as long as the Japanese companies. Their retirement costs have risen as their companies expand and they will continue to do so. The '70-whatever' dollar per hour figure is misleading at best, b/c it purports to show that each worker is receiving that much in benefits. That's completely untrue. Using the actual number the worker earns would give a better picture of what the wages are.

I think the UAW was correct in asking the salaries to be lowered over time, instead of drastic drops immediately. Drastic drops make their employees just as screwed as if they lose their jobs anyways; imagine being told that you will be getting 20-30% less starting soon, and your family is already on the edge of viability.

And, were there any drops in CEO pay being discussed? In management salaries being cut? I didn't see any. The head of Ford makes 90 Million a year; was there any mention of cutting that down? I sure didn't hear it in any of the proposals. Sort of hypocritical to mandate that one end give up their salaries while doing nothing for the other end.

Cycloptichorn
2 Replies
2
Reply Fri 12 Dec, 2008 03:37 pm
@Cycloptichorn,
All 3 of the CEOs had said that they would cut their salary to $1. It was in their proposals and members of congress were pushing for it too. Pay attention

And they didn't say their salaries could be lowered in time. The didn't agree to ANY concessions in current employee's salaries until 2011. And even a 20% pay cut is preferable to a 100% pay cut when GM goes out of business isn't it? Has anyone even asked the employees?