Forums: Music, Photography, Rock And Roll
Email this Topic • Print this Page
Reply Thu 23 Oct, 2008 05:26 pm
I'm working up some ideas for a photo job I'm doing for Mo's music school. It will feature several people either individually or together. One idea I'm working up is something based on iconic images from rock and roll history.

One idea is based on Bob Dylan's "Subterrarian Homesick Blues" where he's holding the cue cards: Another is Abbey Road:

Can you think of any iconic images I might think about reinterpreting for my project? Here are a bunch of album covers done in legos, and you might get some ideas from one of them:

I don't think I explained my project very well though; the Bob Dylan thing might have thrown the explaination off.

The people in the photo need to be identifiable and, if using individual images they all need to work together to create a whole.

The Bob Dylan idea would be each person, dressed similarly, holding a different cue card that wrote out the message, a different word on each card, but otherwise the same (except it would be a different person in each shot), spliced together like a film strip. Does that explain it any better?

The Lego's thing had some interesting ideas -- Meet the Beatles, Sgt. Pepper's, either of those could work.

I LOVE the Elvis shot but can't reinterpret it unless I showed the faces that belonged to the hands.... 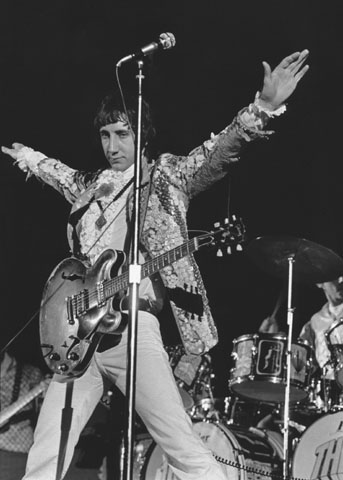 I did something like this at school - with friends re-enacting bowie album covers, from memory these worked the best:

But it's for Mo's school what's your target audience? Will anyone get the Dylan reference (or any of the others that have been posted that are firmly stuck in the 1970s?)
0 Replies