Forums:
Email this Topic • Print this Page
Reply Thu 9 Sep, 2021 09:14 am
Around this time of the year, when the grapes are beginning to color up, my yard is besieged by raccoons on a nightly basis. They are enormously destructive to my grapevines, breaking canes and pulling off vast quantities of as yet unripened fruit and discarding the bunches – or even worse, gorging themselves on the sour unripened grapes and then excreting them, undigested, on the vineyard aisle. For years I've trapped successfully them in a non-lethal trap baited with marshmallows or dried fruit but their numbers just seem to increase. The semi-rural character of this area, with fields and woodlands broken up by old farmsteads and new house lots supports a pretty big population of raccoons – gardens, orchards, vineyards, bird feeders, chicken coops, and plenty of well-stocked garbage cans.

On occasion a non-targeted animal will manage to get caught in the trap. One of my curious cats once spent a night locked up, I released a very embarrassed fox once, and I've caught red squirrels a few times. But the one animal that I really hate to see trapped is a skunk.

The first time I caught a skunk was the worst experience. I thought I heard the trap snap shut and I got out of bed to investigate. Wearing only a t-shirt, I went outside with a flashlight and saw immediately that it was a skunk and not a raccoon. I approached the trap pretty cautiously, trying to figure out what I was going to do. I thought that, possibly, if I kept the flashlight shining in his eyes I might be able to open the trap without getting sprayed. The trap takes two hands to open though and I couldn't keep the flashlight focused on the skunk, nor could I manage to open the rear panel of the trap.
Then I thought maybe the entrance door would be easier to release and I moved to the other end of the trap only to get a full blast of skunk juice right in my face. The next morning, suited up in rain gear, and wielding a garden hose, I managed to open the trap while keeping a jet of water on the animal. I propped up the door with a stick and retreated and the wet skunk eventually shuffled away.

Not an experience I wished to repeat, I changed my bait from fishy cat food to marshmallows, thinking that skunks would be less attracted to junk food.
But animals are curious and over the next few summers I still found skunks in the trap occasionally. One thing I'd learned was to wait until daylight to deal with the problem. I'd don my rain gear and goggles, and then, relying on my experience with the garden hose, I'd fill a 2 gallon pump sprayer and approach the trap, spraying a constant stream of water on the poor animal and, if he turned his back and raised his tail, directing the stream right at the barrel of the gun, so to speak. Well, this worked pretty well but it lacked a certain elegance, and I thought I could do better.

So this is the successful technique I currently use: if I see a skunk when I check the trap in the morning I don't bother with any protective gear. I no longer wield a pump sprayer. I simply get down on my haunches and slowly, very slowly, move toward the trap, addressing the skunk in my softest, gentlest bedroom manner, "hello skunk, don't be afraid, I'm not going to hurt you, let's get you out of there" – somewhat idiotically, I know, but it's more to put me in the right frame of mind than to communicate with the poor animal. Staying close to the ground I approach the trap from the opposite end of where the skunk is usually curled up looking at me through his beady eyes, having been awakened by the sound of my voice. And then, still speaking softly, I can open the trap using two hands and being very careful not to make any sudden moves. I prop the door open and slowly back off. The skunk, watching me the whole time, more curious than afraid, never shows me his business end. He'll usually just stay sleeping in the open trap all day long and wander off at dusk.

The cool thing about skunks is that their defense tactic gives them a sense of security which other wild animals lack. They don't immediately assume a defensive posture because, in their experience, most animals give them a wide berth. (Dumb dogs are the exception.) And as long as they don't feel threatened they won't spray. I don't mind having skunks around; they eat grubs, grasshoppers, beetles, crickets, mice, and voles and they leave my grapes and tomatoes alone. 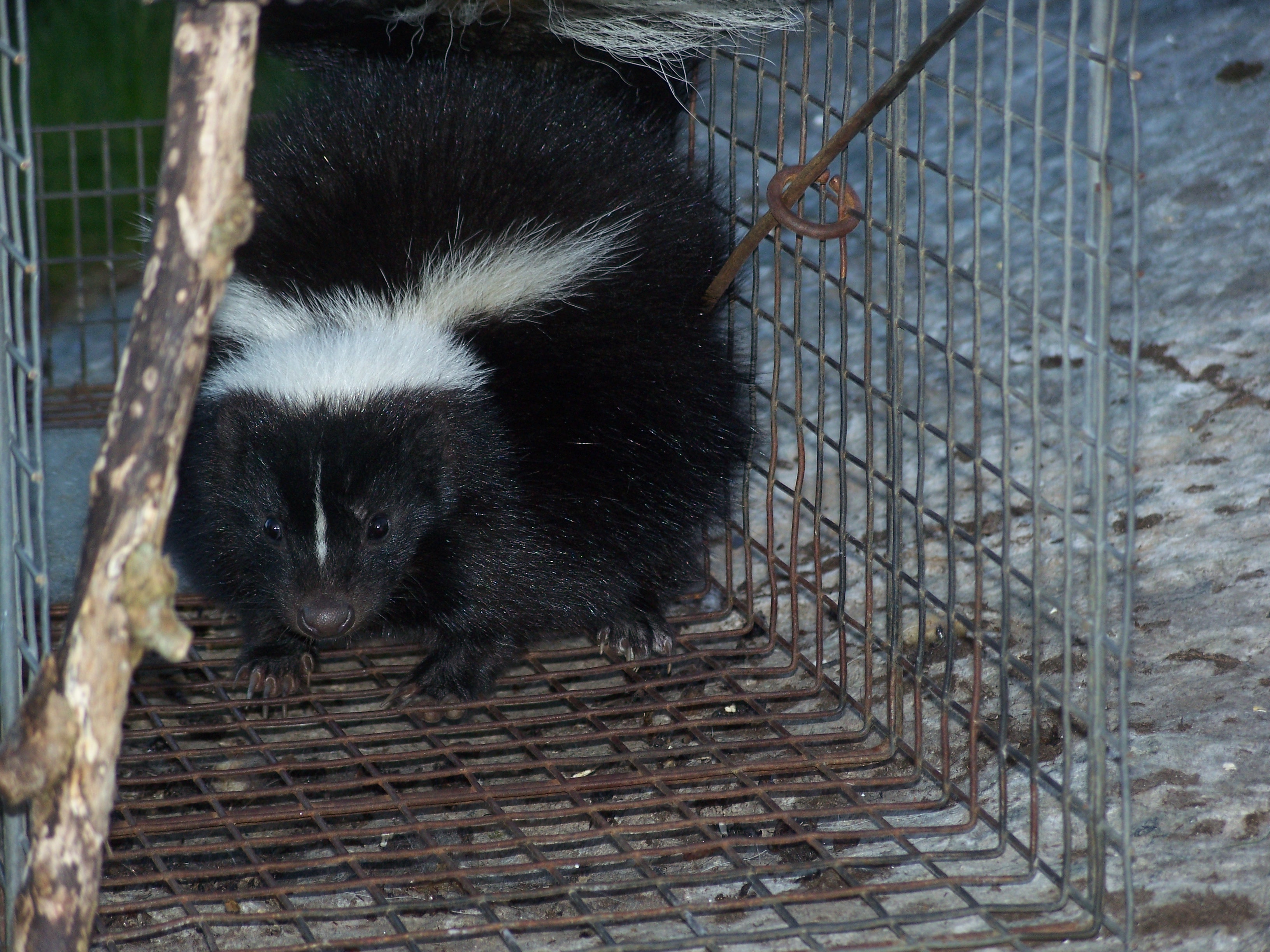 Type: Discussion • Score: 5 • Views: 196 • Replies: 10
No top replies
1
Reply Thu 9 Sep, 2021 03:02 pm
@hightor,
We caught a skunk in a racoon trap once, as well. When we called whomever it was, they said as long as the tail was down, it wouldn't spray. I let my husband deal with it... heh heh That was in West Vancouver where we lived at the foot of a mountain. In Vancouver, though, we had a mating pair of racoons in our backyard for days. The screaming that went on! At least they finally left.
1 Reply
1
Reply Thu 9 Sep, 2021 03:36 pm
@Mame,
Oh yeah, the screams of raccoons are unnerving!

I had "pet raccoons" when I was a kid. My father saw a mother raccoon dead on the road and two confused young ones hanging around the corpse. So of course he brings them home. They could make a lot of vocalizations even as cubs. I remember a coo...coo...cooing call they'd make when they wanted to be let indoors from one of the upstairs windows. They eventually stopped hanging around. Which was a good thing. We kept another coon for a while one summer – my father brought it home because it was injured. It never domesticated and when it became obvious that it could survive in spite of a bum leg we were happy to let it go and see it running with three legs toward the woods. They can be fearsome if cornered – most animal control people consider them the most dangerous animals they're likely to meet.
0 Replies
1
Reply Thu 9 Sep, 2021 03:40 pm
In my experience, skunks are easy to deal with, unless as you mentioned there is a dumb dog around.
1 Reply
1
Reply Thu 9 Sep, 2021 04:29 pm
@edgarblythe,

our not-so-dumb dog managed to get sprayed in the face while wearing the 'cone of shame' one summer.

it took weeks of washing him (and it) before the smell finally dissipated...
1 Reply
1
Reply Thu 9 Sep, 2021 04:39 pm
@hightor,
we have several "pet striped skunks" One, we named T BONE cause of the pattern of white fur on his back. They mostly inhabit the nighst but sometimes are day hoppers also.
Theyre not so bad (Course our nearest people neighbor is 1/4 mile up the road. Our skunks relish Meow Mix. A few yers ago we hqd a minor invasion of spotted skunks (this is waay too far north for them and I guess they were just a scout party)> Spotted skunks spray firt then make friends. Opossa are common and they just hang in trees and come own to eat spolied veggie and new compost droppings

Im just glad that were about 50 mi south of Pa bear country (they begin in S Berks County) and maybe we re 300 miles south of moosilvania. (Southern NY STate)

When we hung around Eastport we used to get mama moose and mooslings all around us. they were a pain in the ass too. Maine bears arent as dangerous as PA bears.(We get em 6 to 800 pounds). Most Ive seen in Maine were only big as german shepherds. I think you guys have overhunted them and use jelly donut bait stations that guides set up. Here in Pa, we only sell a few thousand bear licenses and NO guide requirement an NO JELLY DONUT HUNTING .

We dont see many racoons, they hang out down below the lower meadow near the stream and eat crayfish. ONLY when I grew sweet corn did I ha ve to orry. I ont grow sweet corn anymore, at 4.00 a dozen of th sweetest ears grown by Amish veggie farmers , it just doent pay to grow onself. ITs like raising chicks into laying hens. we buy chickens from a grower who grows em from chickhood to 20 weeks
0 Replies
1
Reply Thu 9 Sep, 2021 04:40 pm
@hightor,
My neighbor catches skunks in HAVAHEART traps and then he throws a trp over the trap and puts it in hi truck and hauls it to the blue marsh Lake area.
0 Replies
1
Reply Thu 9 Sep, 2021 06:28 pm
@Region Philbis,
Many a not-so-dumb dog has gotten a faceful of porcupine quills too – I think it's a dog thing.

1 Reply
1
Reply Sat 11 Sep, 2021 06:43 am
@hightor,
You gotta admit though, porcupines are about the dumbest folks around. Ive lost many a fluid hose on a Jeep from porcupines chewing through and getting the sweet and deadly flavor of antifreeze. Id often fine the deadporcupine withing a mile of the car (After Id tape up or replace the hose)
When we were doing work up in Labradorite country I recall we started using RV antifreeze (prop glycol) which wasnt deadly poison to animals. But we always carries at last three coils of needed plastic hose and a couple gal of antifreeze fluids
1 Reply
1
Reply Sat 11 Sep, 2021 06:52 am
@farmerman,
Damn things would gnaw on my axe handles to savor the salt from my sweaty hands.
1 Reply
1
Reply Sun 12 Sep, 2021 06:48 am
@hightor,
we have friends who live in the town of Strsburg (The Pa RR museum is there as ell as the STrasburg RR) They live in a historic house in town an they an their neighbors are infested with skunk families There a lancaster guy who traps and dumps all kinds of unwanted wildlife (he does a loot of deskunking) up in the N woods for a fee. Ya ant any foxes (if chickens are a nuisance )
0 Replies