Forums: Dude
Email this Topic • Print this Page
Reply Wed 18 Mar, 2020 07:02 am
I was watching an X-Factor video, and this gentleman from Liverpool came on, and did an amazing job of singing "The Rose" (Some say love, it is a river, etc.) What caught my attention, though, was that when he talking to his mother, I could not understand what they said to one another. So I found this:

. . . which didn't really help me much, because I had a hard time hearing the subtle differences in pronunciation, and it doesn't really give you a feel for the rhythm of the spoken language, and how the Scousers apply stress to what they say.

The gentleman on the X-Factor got a great reception, and his singing sounded more like a Canadian or an American that it sounded like an Englishman, never mind a Scouser. But I've noticed that before with a lot of people who sing in English. My favorite was a woman on Got Talent España, who began singing opera, before switching to . . . well, you'll see. Christina Ramos sings a kind of international English.

In fact, her English is easier to understand than that of "Bon" Scott, lead singer of AC/DC, who was born in Scotland, as were Malcolm and Angus Young, who founded the group. So, we have a Spanish lady, singing a song which was a hit for an Australian band, which was largely comprised of Scots. Go figure . . .

Of course, I've been a big time Beatles fan for almost 60 years. I always liked their humor, too.

What do you call your hair style?

How did you find America?*

(*An Englishman asks how did you find something when he wants your opinion on it.)

That's my story and I'm stickin' to it.


At this moment, SHAKE, a tall man who works with the BOYS, pulls open
the door of the compartment.

SHAKE
You got on all right then?

SHAKE
We're here. Norm'll be along in a mo' with the
tickets.

JOHN
(cutting in)
No, that's his other one.

SHAKE
That's all right then.


0 Replies
1
Reply Thu 19 Mar, 2020 01:51 am
The Scousers are really pissed off with Covid 19. Liverpool FC is only a couple of games away from winning the premiership. They are not happy. If the season is cancelled God knows what will happen.

0 Replies
1
Reply Thu 19 Mar, 2020 01:58 am
The Liver bird is the symbol of Liverpool, it's a type of cormorant It's all over Liverpool, including the coat of arms, but the most famous examples are on top of the Royal Liver building. 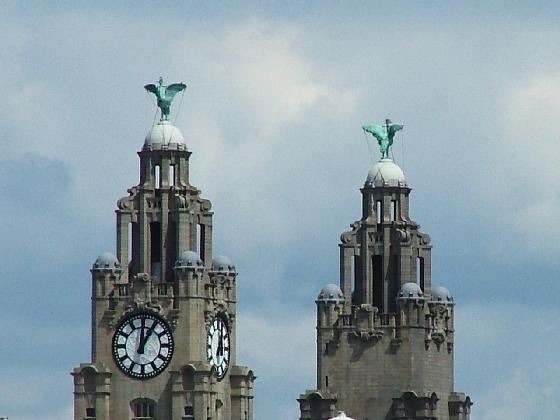 It's also the name of a pretty dire sitcom by Carla Lane.
0 Replies
1
Reply Thu 19 Mar, 2020 11:24 pm
There was a contestant of Britain's Got Talent who was a DJ from Newcastle. He was speaking to the panel of judges, none of whom could understand him. They got one of the two Tynesiders who work in the wings to come out and translate for them. I managed to find the vid from his first audition on the program:

1 Reply
1
Reply Thu 19 Mar, 2020 11:52 pm
There are many strange accents in the United States, as well, particularly on the coastal littoral of the American south. This is about Tangier, in Virginia, first settled in the 1680s.

0 Replies
1
Reply Thu 19 Mar, 2020 11:54 pm
The Appalachian Mountains were settled largely by Scots and Irish immigrants. This one runs about an hour, but you can get the flavor of it from the first few minutes.

1 Reply
1
Reply Fri 20 Mar, 2020 03:32 am
@Setanta,
The term is Geordie, if you want a real masterclass google auf weidersein pet oz.
0 Replies
1
Reply Sat 21 Mar, 2020 02:30 pm
"I's the B'y" is a Newfoundland song, and one of the few cases in which it would really be appropriate to call something iconic. For many Canadians, the song stands for Newfoundland and all the Newfies.

0 Replies
1
Reply Wed 25 Mar, 2020 08:25 am
@Setanta,
Really was interested in Scousers and the whole lowdown with the Beatles connection. The humor is what grabbed me (Harrison and all of them really).

Really am enjoying that article on the Appalachian mountain people in their accents. I’m just about finished with the whole video and enjoyed the hell out of it. We have such a rich and varied culture. I enjoy my recent travels Domestically and abroad and feel blessed that I’m able to continue.
1 Reply
1
Reply Wed 25 Mar, 2020 09:02 am
@Ragman,
I didn't post anything on the coastal islands of the Carolinas and Georgia. I'll see if I can find something. The inhabitants are (were?) primarily blacks, and their English was based on Elizabethan English.
0 Replies
1
Reply Wed 25 Mar, 2020 09:04 am
Haven't found anything on the blacks yet.