Forums: 1150 Charter
Email this Topic • Print this Page
Reply Thu 7 Nov, 2019 08:34 am
Hi
I am carrying out some family research and have come across some text that I feel is important and I cannot afford to miss understand the wording.

The background is, in the Charter a man named Robert Mallet is giving land to this person before the persons name there is this text..... Malus Nepos.

My take on this text is that the person is Robert Mallets Grandson but why use the word Malus rather than Mallei. The Malus word is used three times later in the charter for different people so I know that its not a Clerks error.

Any assistance will be much appreciated.

There's a bit online, but about Robert Malet [sometimes written Mallet] Robert Malet, Baron of Curry Mallet (Baron of Eye) on Geni or how his (Robert Mallet's) was given away in the Gazeetter and directory of Leicestershire

It's always the best to look at the original source or, if that's not possible, to the oldest reference to that.
0 Replies
1
Reply Thu 7 Nov, 2019 02:16 pm
@Pincerna,
Language wasn't quite so fixed then, Shakespeare always spelled his name differently whenever he signed something, and 1150 predates Chaucer by about 200 years so it's not even Middle English.
1 Reply
1
Reply Thu 7 Nov, 2019 02:27 pm
@izzythepush,
izzythepush wrote:

Language wasn't quite so fixed then,


True. To give a personal example: my oldest known ancestor was a certain Diethmaro "de Hinthlere", the mansion was called "Hentlare", while a different person from there was named as "de Henthlere" - all in the same deed (from 1287) 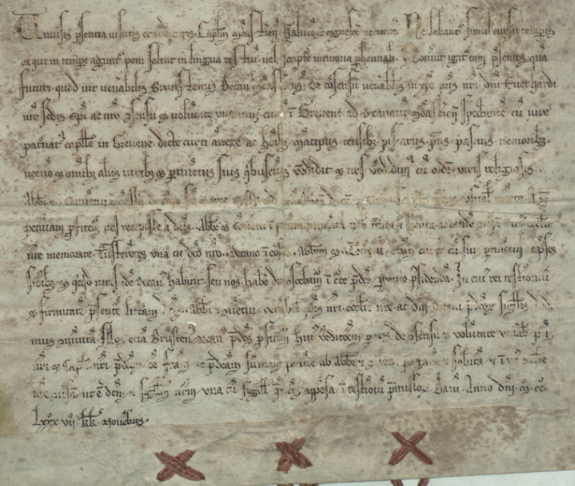