Wait?! We're only one state away from getting the Equal Rights Amendment passed? 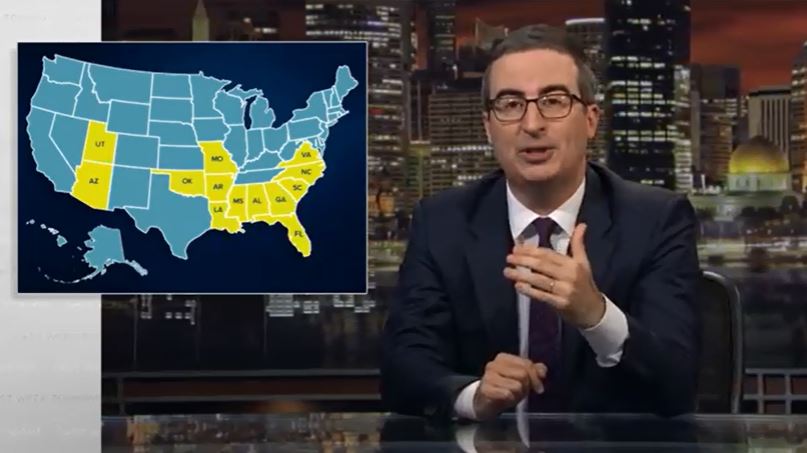 So? Which one of these states could be on the right side of history by finally ratifying the amendment? Keeping in mind that we also will need Congress to retroactively change the initial 1979 expiration date initially established for the states to turn the ERA into an actual active constitutional amendment.
•Alabama
•Arizona
•Arkansas
•Florida
•Georgia
•Louisiana
•Mississippi
•Missouri
•North Carolina
•Oklahoma
•South Carolina
•Utah

Arizona and Florida would be the only hope there and no way Congress extends the deadline, but it's an interesting thought exercise.


You do know that the female voters are roughly 52 percents of all voters?

Given that little fact along with Republican officer holders seem willing to do anything to remain in office the deadline would be extends if the states vote for it in enough numbers to get it pass otherwise.
1 Reply
2
Reply Tue 11 Jun, 2019 06:54 pm
@tsarstepan,
Actually the ERA is great for men's rights (particularly father's rights) as well as woman's rights.

Section 1. Equality of rights under the law shall not be denied or abridged by the United States or by any State on account of sex.
Section 2. The Congress shall have the power to enforce, by appropriate legislation, the provisions of this article.
Section 3. This amendment shall take effect two years after the date of ratification.[3][4]


This protects men as much as it protects women.

It means that custody decisions will be made without being influenced by gender stereotypes. Currently in some states, custody is award to the mother 90% of the time. Under the ERA this would be equal.

It also means that women will be part of any military draft.

And maternity leave will now officially be parental leave and will be open for fathers.

Actually the ERA is great for men's rights (particularly father's rights) as well as woman's rights.


Also minority and LGBT rights. I remember a friend in high school saying she was against the ERA because it would protect homosexuals. Those were the types of arguments being used against the ERA back then.

Also, five states on the original post voted to rescind their approval, so we are really six states away unless a court rules votes to rescind are not valid and with our current Supreme Court, I doubt that would happen. 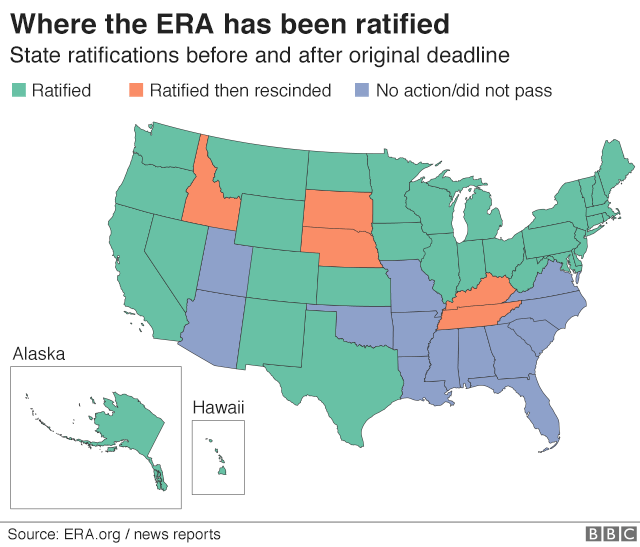 I am odd that way.

Jon Oliver needs to address this error of omission (?)/overlooked details (?) regarding his previous show/statement. It is kind of important.
1 Reply
1
Reply Wed 8 Jan, 2020 11:49 am
@tsarstepan,
Virginia May Ratify The Equal Rights Amendment. What Would Come Next Is Murky

The ERA nearly passed there last year. The then-Republican-controlled Senate approved the amendment with solid Democratic support, but it was one vote shy of getting a floor vote in the Republican-led House. November's elections then swept Democrats into control of both the House and Senate.

If lawmakers pass the ERA this session, Virginia would become the 38th state to ratify it, and an amendment needs 38 states to be fully ratified and added to the U.S. Constitution.

The main text of the Equal Right Amendment being considered right now is pretty simple: "Equality of rights under the law shall not be denied or abridged by the United States or by any state on account of sex."

The U.S. House has voted to remove the deadline on ratifying the Equal Rights Amendment in an attempt to revive the amendment. The 232-183 vote fell largely along party lines with five Republicans supporting the measure and zero Democrats opposing it.

Changing the deadline is a key part of one route that some ERA proponents believe would lead to the amendment becoming a part of the Constitution, but the path forward is uncertain.

The proposed amendment says simply, "Equality of rights under the law shall not be denied or abridged by the United States or by any state on account of sex," and it has had a renaissance in recent years, with three states ratifying it since 2017.