I don't think anyone believes Cohen is a model citizen, he's going to jail, he lost his law license, his life is practically ruined. So......what was Matt trying to convey? I think he was reminding the American people, that if they didn't already know he was a massive a$$hat after he threatened the parents of the murdered children from Parkland massacre at a hearing a few months back...he stepped it up so we all know he has no self respect and is a complete neanderthal. Thanks Florida.
Type: Discussion • Score: 3 • Views: 903 • Replies: 14
No top replies
0
Reply Tue 26 Feb, 2019 06:48 pm
@glitterbag,
Doesn't sound like I would enjoy meeting either of them.

Biggest jerk in congress? The competition is tough.
0 Replies
1
Reply Wed 27 Feb, 2019 04:55 am
@glitterbag,
He is one of the slimiest creatures in the GOP right now (which is a hell of an accomplishment when you think about it). That he has gotten as far as he has is a depth sounding of how morally and intellectually bankrupt the party has become.
1 Reply
0
Reply Wed 27 Feb, 2019 02:06 pm
@blatham,
In today’s hearings, one of the congresswomen stated she wants Gaetz investigated for making threats and obstruction of justice. His behaviour is making a mockery of the process. His foolishness and malevolence might be entertaining if he was a character in ‘The Sopranos” , but he’s a US congressman from Florida....and it’s time to make the House and Senate members live up to their sworn responsibilities.....it’s time to get rid of anyone who flys by the seat of their pants when handling the people’s business. It ain’t horseshoes. (By the way, Jim Jordan is also a huge jerk)
1 Reply
1
Reply Wed 27 Feb, 2019 03:01 pm
@glitterbag,
I saw that. At least one investigation has been opened in Florida.

And yeah, Jordan is a huge jerk. And Meadows and almost every GOPer who has opened his or her mouth at today's hearing. Very clearly, they are all following a messaging strategy, repeating, repeating, repeating it. The lack of integrity is frightening.
1 Reply
1
Reply Wed 27 Feb, 2019 04:28 pm
@blatham,
Did you see Elijah Cummins closing remarks? Wow! We need more public servants like Elijah.
1 Reply
1
Reply Wed 27 Feb, 2019 05:08 pm
@glitterbag,
No, had to stop watching before that point. I like Cummings a lot. Good man. But it certainly was a ****-show. Will the Republicans stick to their ridiculous script tomorrow? I think surely they will because because they clearly see that as their only option. They aren't going to ask relevant questions (or perhaps very few) because the answers they get aren't likely to be good news for their cause. And of course everything they did to day was in aid of the narrative that Trump, his supporters and right wing media is pushing.
0 Replies
1
Reply Wed 27 Feb, 2019 09:06 pm
https://www.thedailybeast.com/matt-gaetz-under-investigation-by-florida-state-bar-over-michael-cohen-threat

The organization, which licenses lawyers to practice in the state, would not disclose details of the investigation, but spokesperson Francine Walker, said the bar is “quite aware of [Gaetz’s] comments... and we have opened an investigation.”

Please view the official complaint here that was filed February 27, 2019 with the U.S. House of Representatives Office of Congressional Ethics and see a copied version of the text pasted below.

1 Reply
1
Reply Wed 27 Feb, 2019 09:54 pm
@ehBeth,
People like Gaetz have likely been bullies long before they get bold enough to send out such a tweet and then double down with a bullshit explanation of 'witness testing'. He is of low character and seems to think his skeletons will never be dragged out of a closet. He was piggish and a lout, nothing else to say.
1 Reply
1
Reply Wed 27 Feb, 2019 10:01 pm
@glitterbag,
actually he was plain old stupid

he should have realized what was going to happen
1 Reply
1
Reply Wed 27 Feb, 2019 10:09 pm
@ehBeth,
He should have, but unfortunately the climate has been favorable for thugs. He expected to intimidate Cohen and to also look like a mortality monitor...he miscalculated.
0 Replies
1
Reply Sat 2 Mar, 2019 06:45 pm
https://mavenroundtable.io/theintellectualist/news/matt-gaetz-was-the-sole-no-vote-on-a-bipartisan-anti-human-trafficking-bill-tpiWXXNnLEakGGGVoQWdtg/?

Rep. Matt Gaetz argued the anti-trafficking bill was an unnecessary expansion of the federal government.

Florida Rep. Matt Gaetz told The Miami Herald on Wednesday that he does not believe investigating the outcome of pedophile multimillionaire Jeffrey Epstein’s case is a wise move, saying it would set a “dangerous” precedent of second-guessing prosecutorial decisions.

Gaetz stands quite alone in his opposition to probing the matter, which involves President Donald Trump’s labor secretary and former US attorney Alex Acosta.


But this is not the first time Gaetz has separated himself from the pack on an issue that appears to have nearly unanimous bipartisan support.

In December 2017, the Florida congressman cast the sole “no” vote on a bill that would further the federal government’s ability to investigate and prosecute human trafficking.

At the time, Gaetz defended his decision by saying it was not a vote against anti-human trafficking legislation but a vote against expanding the size of government, according to the Pensacola News Journal.

In a live Facebook video, Gaetz said, "Where there is a necessity to change legal standards to bring prosecutions against human traffickers, I'm all in,” adding that he has successfully worked to implement similar legislation at the state level.


It would seem that lawmakers on both sides of the aisle concurred that more federal government was necessary in this situation, as the measure passed both houses of Congress on December 19, 2017. 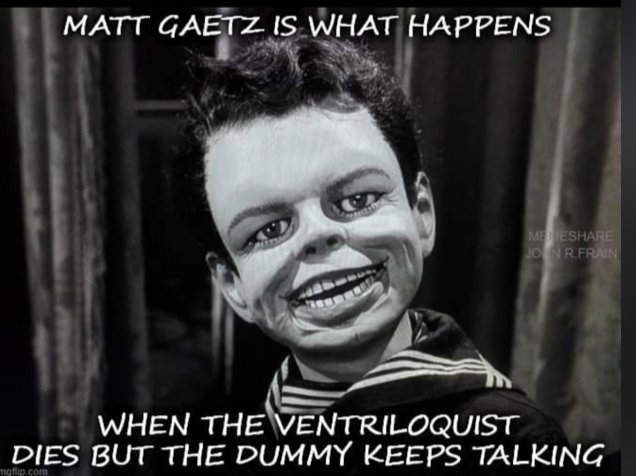