My friend sent me an email with a huge petition attached against this site.

I politely informed her of her stupidity.

Against believing that this site was real? Or that email petitions actually do anything?
0 Replies
1
Reply Thu 19 Jan, 2006 03:26 pm
The petition was for removal of the site, because everyone who signed, including my friend, thought it was a legit site.

The petition was for removal of the site, because everyone who signed, including my friend, thought it was a legit site.

I let her know the site was a hoax. And that torturing kittens is funny either way.

I do my best to be nice to my friends who fall for this crap. It's hard....so very hard...
0 Replies
1
Reply Tue 27 Feb, 2007 05:40 pm
bonsai kitties for sale
u all are a bunch of faggots if you think there was anything funny about the concept of animal abuse.

u all are a bunch of faggots if you think there was anything funny about the concept of animal abuse..

u all are a bunch of faggots if you think there was anything funny about the concept of animal abuse.

And you, my friend, are an ignorant sod if you think there is anything "cool" about name calling and using terms like "faggot".

0 Replies
1
Reply Wed 28 Feb, 2007 09:07 am
If you stuff kittens inside of cans or bottles filled with water, then shoot them with a high powered rifle, not only is the explosion really cool, but the cats spring out, flip over backwards, and land on their feet before dying.

and here is my most recent project.

I have also moved onto Bonsai Men.... 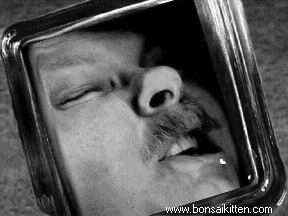 
i write this from a hospital bed. im here for two reasons my side hurts from laughing and i was clipped by a car that hit me when i ran out onto the road because my cats duct tape diddnt hold the cat for long enough. if u did not write this thread i would still have all 4 limbs and the cat would not be missing bits of fur(ends up that duct tape removes hair but dosnt stik to gravle).

this is the best eva
but im from PETA and im gonna get u son of a [email protected] for being so meanto the poor ppl who read this, u could seriously hurt there stomaches from laughing

of course i love cats..... with sauce

the soul collector will remain tuned to this as long as one of the other regulars remain
0 Replies
1
Reply Thu 1 Mar, 2007 11:53 pm
this thread has had the biggest veiw to post ratio
its about (rough calculations) 1-5000

also my mum told me that when she was a kid she wanted to see if her cat could swim....... cat..dam...cat...dam....cat....dam............cat in dam
need i explain any more
(so i do not spark the imaginations of stupid little kids that do every thing the net says i will tell u now that cats can swim so u dont have to use a cat to find out, if u must do it get ur cats consent before u do it)


VANCOUVER, Wash. -- Curiosity didn't kill Ralph the cat, but it did get the feline stuck in a tight situation Sunday.


Two men arrived at Vancouver Fire Station 85 on Sunday with a cat whose head was trapped in a Mason jar, reported television station KPTV in Portland, Ore.


Firefighters said the men came home from a weekend camping trip to find their cat, named Ralph, stuck in the jar. After some trouble shooting, firefighters decided to lube up the jar. They then guided Ralph's head out.


The cat wasn't hurt, but it remains a mystery how his head got in the jar. The men weren't sure how long the cat had been stuck.
http://www.clickondetroit.com/family/16941665/detail.html
0 Replies