America’s National Debt increasing too much

Forums: Usd, Poverty, Economics, Debt, Bankruptcy
Email this Topic • Print this Page
Reply Sun 1 Oct, 2017 05:55 pm
As America’s national debt continues to increase, will it ever be controlled, or America go banrupt? I don’t see is paying off a debt higher than our GDP in ratio.

The national debt broke over $20 trillion this year and with Trumps plans for military intervention in the Middle East and against North Korea billions more will be spent. That along with paying for all these damages for hurricanes. The healthcare program called CHIP was cancelled this weekend after expiring. With huge pensions, an elderly population hitting Medicare and Medicaid at once, will America’s debt ever be under control?

so will America have to declare bankruptcy?

(the USD is crashing) so will America have to declare bankruptcy?

Ummm, no the dollar is not crashing at all. A few years ago the Chinese yuan was worth 16¢. Now it's worth about 15¢. 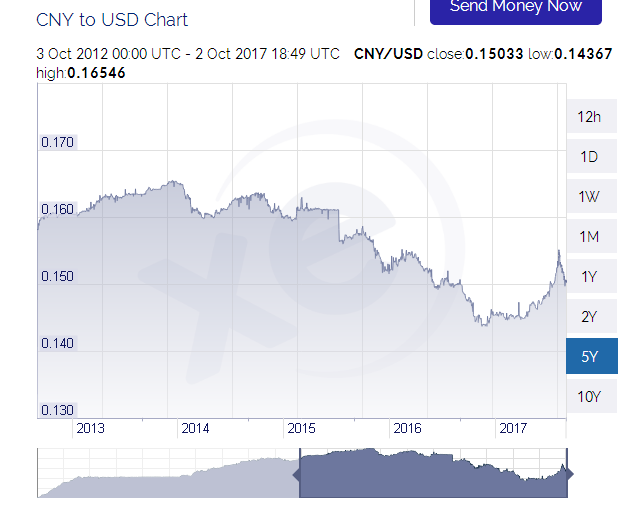 The dollar is up against the British pound and the Euro over a few years ago too. So how is the dollar crashing?

1 Reply
1
Reply Tue 3 Oct, 2017 05:08 pm
@Blickers,
That chart shows how far it has dropped in five years, despite going up a little bit recently. AND again...our national debt is going up and up. It's been over a decade since we lost our surplus. This is one of the highest debts we ever had.

The fact you see more states like Connecticut and Illinois collapsing shows this country is doing very bad. My concern: economic collapse. We can't keep spending but it's all we do.
1 Reply
1
Reply Wed 4 Oct, 2017 02:23 am
@bm1234,
No, the chart shows how much the dollar has risen against Chinese currency. Note how the Chinese yuan was worth more American money a few years ago (16¢), than it is worth in American money today, (15¢). That is to say, the American dollar is worth MORE against Chinese currency today than a few years ago. The same is true for the next two most important currencies, the euro and the British pound. The dollar is worth more against them now than a few years ago as well. So your whole theory is disproved.
0 Replies