Love them? Hate them? Would trade your soul to live in one?
6 Modular Houseboat and Floating Home Manufacturers Around the World 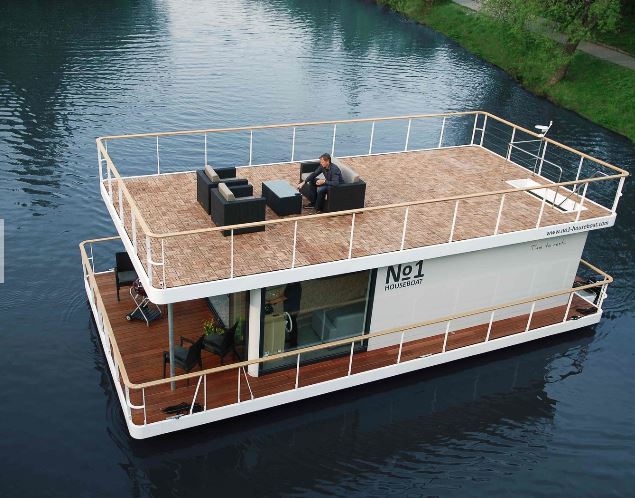 In theory I like them - because they're on the water and I am a true waterbaby.

In practice - nah, most look dreadful to me.


I guess one of the main reasons I'm fascinated with the concept is that I always had a roommate in one form or another. Still rather have a housemate to share my future residences.

But I guess this is another form of daydreaming about owning my own home.

In this case, the maintenance and upkeep of a houseboat makes owning and living on one... pretty challenging (but in a discouraging way).

As a kid, my feet only touched water in the ocean at the very edge. Later, Chicago area, I go as far as up to my knees. I took my first set of swimming lessons around then, at Northwestern, and have described my useless kicking on another thread. Skipping along, I finally learned how in my later thirties, and got to love it, but only in a safe YMCA pool. No ocean (which was nearby where we lived in California) for such as me. I loved the beach, loved running right by or in the watery sand, but no attempt to swim. I had a hard enough time trying to tread water in a Y pool, much less the ocean in Venice, CA at any time of day or year.

I've only been on boats a few times in my whole life -
Fishing with a neighborhood friend of my age, my dad as the adult, in Wisconsin's Lake Tomahawk. She's the one to catch the dogfish shark.
That was just a rowboat.

Long later, one of my smart ass group girlfriends (sag for short) threw a party by hiring a yacht to celebrate her and Leo's engagement. I was particularly pleased that the yacht didn't venture out of the Marina; the food and drinks were terrific, and we all liked both of them. A yacht rental? Those two had money - not all of us did, let's say a mixed group of pals, moneywise. It was a memorable pleasure and I can still picture it.

Then there is the San Francisco area, circa Sausalito. I was never out there studying the boats, too busy driving north, but a teacher of mind lived on one of them for some while - my favorite teacher, later colleague, and we'd still be conversing, I hope, if my internet ability would pick up.

He is Japanese American, very short by american standards, hefty knowledge, and taught our class how to ride bulldozers.
0 Replies
1
Reply Tue 26 Sep, 2017 01:07 am
In many cases they can be a lot cheaper than an actual house. London house prices/rents are exorbitant, a berth along the Thames not so much.
0 Replies
1
Reply Fri 29 Sep, 2017 01:25 pm
@tsarstepan,
Then again, I have thought about his neat it'd be to buy, renovate and live on one of the old boats which part of an earlier fleet of the Staten Island Ferry.

Lots of space, large decks outside, storage under the seats...
0 Replies
1
Reply Sun 3 Jun, 2018 08:11 am
I used to know someone who lived on a canal boat. There are typically mooring fees etc not to mention she had to take the boat out of the water to do maintainance & repairs on the hull which is kinda a pain!
0 Replies