Forums: Economic Index, English
Email this Topic • Print this Page
Reply Mon 30 Jan, 2017 09:36 am
I don't understand the meaning of "registered -54". Who would like to explain it for me?

Gallup's measure of Americans' confidence in the economy via its Economic Confidence Index improved significantly over Obama's tenure, though unevenly. The index registered -54 in January 2009 when Obama took office and climbed to +9 by December 2016.


Can you understand it better now?

It means that the index attained the value of 54 points in 2009.


Can you understand it better now?

What I don't understand is that it is negative -, different to positive +:

In the below, +33 should have meant that the index attained the value of 33 points, which seems to mean 33 above zero point.

Thus I guess that -54 would mean 54 below zero point, which is not understood by me and is why I got confused.

One CCI is given by University of Michigan, as I posted above and the other is Gallup Economic Confidence Index as you can see below: 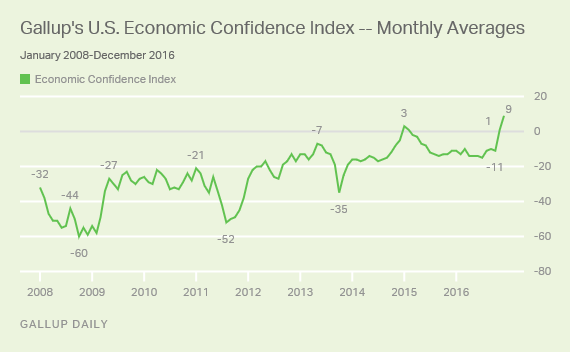 0 Replies
1
Reply Mon 30 Jan, 2017 01:00 pm
I'm not familiar with the specific indexes, but I would mention that the last quarter of 2008, the country lost 2.6 Million Full Time jobs. If anything can drive an economic confidence index into negative territory in 2009, that would be it.
0 Replies