Forums: Americana, Driving, Popular Culture, Roadside Giants
Email this Topic • Print this Page
Reply Thu 14 Jul, 2016 01:11 am
An article from the BBC website I thought I'd share with you. 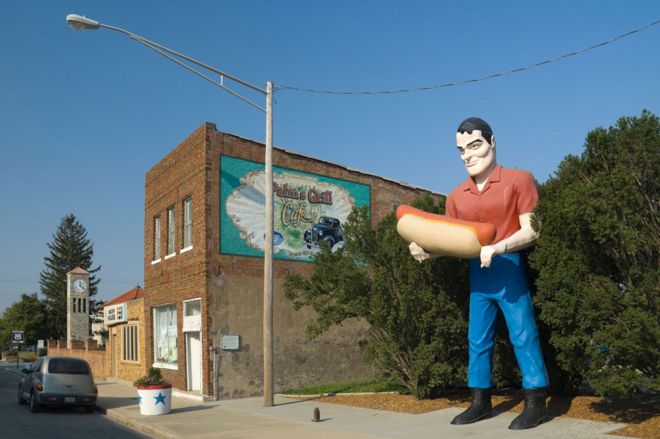 Anyone making a road trip across America will sooner or later run across a giant statue - a cowboy, an American Indian chief or a lumberjack, perhaps. Many, now half a century old, are falling apart, but one man and his friends are tracking them down and bringing them back to life.

On the concrete floor of an Illinois garage, a giant rests in pieces. His head is the size of a wardrobe, his bulging torso bigger than a double bed.

The 23ft-high (7m) colossus stood for 45 years outside Two Bit Town, a now-abandoned tourist attraction in Lake Ozark, in the heart of the American Midwest. Chief Bagnell, as he was nicknamed, was one of thousands of giant statues designed to entice travellers to pull off US highways.

Now he is getting a makeover thanks to Joel Baker, a television audio technician by day who is America's leading restorer of fibreglass figures made in the 1960s and 70s. 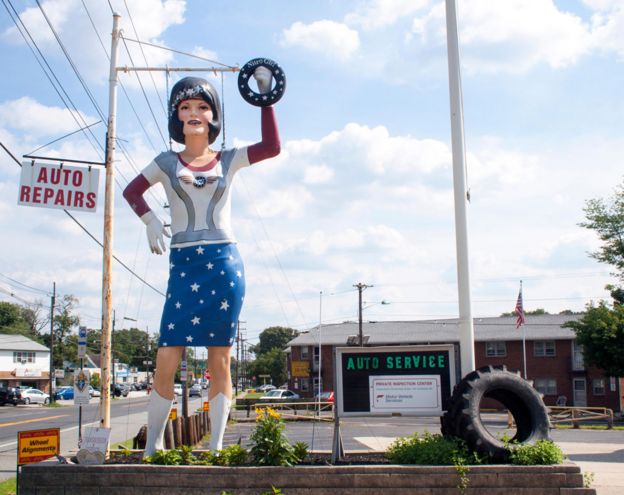 Good luck to him, the history of popular culture is as worthy as preservation as a Victorian horse trough, if not more so.
Type: Discussion • Score: 0 • Views: 4,148 • Replies: 4
No top replies
2
Reply Thu 14 Jul, 2016 01:48 am
http://www.roadsideamerica.com/attract/images/nm/NMFARmuffler_solem.jpg

Here's ours in Farmington, NM. He's been here for years and finally made the NM AAA magazine. They had a photo of the woman who does my, and many other peoples alterations. She had made dozens of changes of clothes for him, and seemed kind of happy when I gave her my copy.

AAA Magazine (American Automobile Association) isn't a big publication but I'm pretty sure she never had her picture in anything like that before.
1 Reply
1
Reply Thu 14 Jul, 2016 06:56 am
@roger,
He does look cool, as the article says. I think he's great.

The "Big Man" has been a Farmington landmark since the early 1960s, previously residing at Western Tire. In the spring of 2005, Western Tire closed their doors and the "Big Man" was purchased by Sun Glass. In a contest, the community was asked to give the "Big Man" a name. After many ideas, the winning name chosen was "Sunny the Big Man." Sunny the Big Man's costumes currently consist of his Sun Glass uniform, a black tuxedo with tails and top hat, Connie Mack baseball uniform, western cowboy hat, and a Santa Claus suit. The community enjoys seeing his costumes change to meet the season and special occasions. Sunny stands 22 feet tall and is a popular photo opportunity for those visiting the Farmington and Four Corners area. All parades in Farmington pass "Sunny the Big Man" and a local radio station now broadcasts parades from his location, increasing civic pride at 602 West Main.