By Scott Gold, Joel Rubin and Kate Mather
November 1, 2013, 6:41 p.m.
A composed, solitary gunman shot his way into Los Angeles International Airport on Friday morning, killing a transit security screener and injuring at least one more before being wounded by police and taken into custody. The incident was over in less than 10 minutes but caused chaos at the world's sixth-busiest airport and disrupted thousands of flights across the nation.

The suspected gunman was identified as Paul Anthony Ciancia, 23, a New Jersey native who lives in Los Angeles.

Authorities declined to discuss the gunman's motivation publicly. But a law enforcement official told The Times that a note was found on the gunman expressing "disappointment in the government" and noting that he had no interest in hurting "innocent people." Ciancia also sent a sibling a text message last week suggesting that he was prepared to die, officials said. 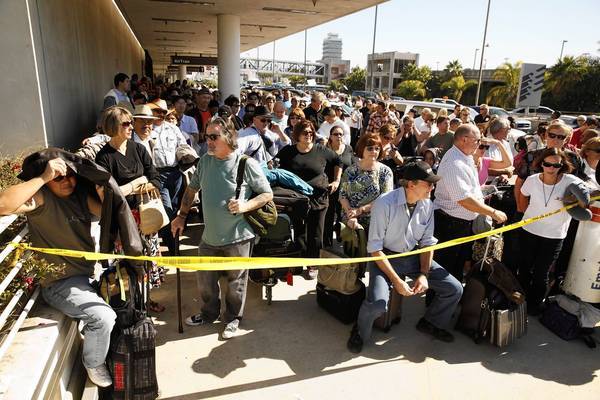 Even if basic guns were miraculously outlawed, there will always still be these actors.

Anyway, this hits home that this yo yo could do this, at the same time I agree with the former head of the tsa stuff/staff said he didn't think it wouldn't be that useful to arm all the tsa people.
1 Reply
1
Reply Sat 2 Nov, 2013 03:35 pm
@ossobuco,
I wonder what his thoughts are now? He was prepared to die, didn't want to hurt "innocent" people? So law aren't people?

The problem is, there are more of these people running around highly armed. What we do about it - there are other threads for that.

I knew LAX as a young airport maybe two miles from my own later neighborhood.
I know of endless contretrempts on all that. I had a classmate whose lover lived nearby and placed rugs on all his walls.

Anyway, I remain interested in stuff about it. For example, my husband's father, who stopped school after fourth grade but was an avid history reader, was for many years, many years, an airline mechanic. Plus on my side of the family, Charlie, with Douglas; I've talked about him before.
0 Replies
1
Reply Mon 4 Nov, 2013 02:33 pm
Here's the latest on the shooting from CNN.
0 Replies