The 10 worst cars you never wanted to drive

But the Honda Accord model is a car with inherited bad issues since its release in 2012. (9th generation)

The first main problem was the audio.

Brand new Honda Accords 4 and 6 cylinders, sedan and coupe, were all exposed to malfunction of the audio device. Luckily many cars had their radios working OK, but complaints like crazy came out thru months. Mine had the trouble and was fixed by itself, please don't ask how because I don't know.

Honda technicians "cleaned up" the stain, and asked the owners to come back if the leak shows up again.

One owner still asking what kind of "cleaner" Honda technicians have used, because stop the leaks for years, but the stain will eventually come back right at the time when the warranty is expiring.

This problem with the Honda gaskets between the motor and CVT is a major repair, that will cost you hundreds of dollars and the car in the shop for a week, unless Honda is smart and instead of replacing the gasket, charges you for such replacement but only use their famous "cleaner" and you won't see any leak up to more years later.

Another problem is the steering wheel torque sensor, which fails in many 2013 and 2014 Honda Accords.

Honda corporation decided to "extend" the warranty for this part up to 5 years and provide a "fix" which is manipulating the car's computer in case the sensor stops working. With this computer manipulation, the steering wheel will be able to be turned in case the torque sensor fails.

Instead of recalling the affected cars and fix the problem replacing the defected part, Honda decided to provide a temporary "patch".

The gasket to the oil cover tank, also leaks right after 60,000 miles when the warranty has expired.

Another common problem is with the sensor for the timing chain. When the car starts make a rough sound, and Honda technicians swear with their lives that such horrible noise won't affect at all the motor parts, the valves, nothing.

There is another recent recall for the model Accord very recently.

Today, this brand and model has monopolized the repairs, by making hard to find pages for "do it yourself" car owners in the Honda web site.

Honda's intentions is making their dealers as the only ones repairing and doing maintenance to their vehicles.

As a comparison, the Hyundai Sonata has more features, less complaints at the long run, free online repair service manual, cheaper price, and drives and feels the same and better than a Honda.

Of course, the appearance of the Honda is somewhat more attractive than the Hyundai, but about performance, warranty and better and more features, Hyundai is a much better option.

After all, one can customize the car if the look is not what is the best feature in the Hyundai.

To me, after owning and driving some new cars thru the years, the Honda Accord has been an average car with lots of disappointments.

I have had a better experience when in the 80s I bought a Chrysler Reliant, surely that car gave me better driving performance, more comfort, better looking -for a car of that time- more fun, definitively I missed that car.

Before a owned a Ford Pinto, what a crap of a great car! It ended suffering with this car running hard over 45 miles per hour, but what a beautiful sound of the motor... in those times Ford cars were cars...

When you buy cars, you know what you expect of the vehicle by comments made by other owners.

I know that this message is way out of the intent of this topic, but for me, after my experience with the Honda Accord, this is a car I never want to drive again.

After the news release of the torque sensor failure and fix with a computer system patch by Honda corporation, my car insurance premium went up.

Tell me about it. 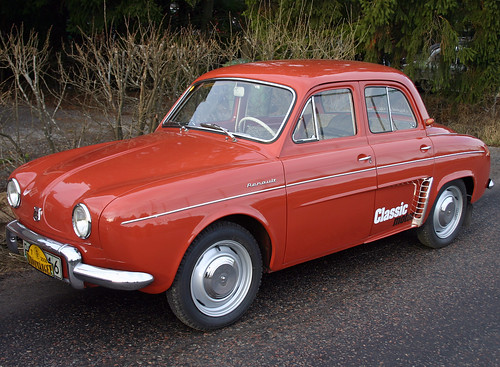 It's the Dauphine with an e. In Britain, there was a TV ad campaign with the slogan "Whatever the load, she holds the road", which, it turned out, was the exact opposite of the truth for many drivers. I think the rear-engine, rear-drive configuration was new to many UK drivers. One retrospective 2008 review said ""as soon as the US market had come to grips with the Dauphine's swing-axle manners and useless acceleration, they were pole-axed by its abysmal corrosion record. It would take only one New York winter of driving on salt-strewn roads to give a Dauphine front wings that resembled net curtains."

However, In July 2010 Jonathan Burnette, a Texas mechanic, set out to drive his 1959 Dauphine to Alaska and back, saying "I've driven these cars all over the country, many, many times, and I've never had that much trouble at all. A lot of people don't like this car, so it's kind of like the underdog."

1 Reply
1
Mon 28 Aug, 2017 01:49 am
@centrox,
My mother bought one of those pieces of crap when I was in junior high. Brand new, and an instant junker. One little novelty was the included crank. Yeah, that kind of crank. If you ran the battery down while trying to start it, you just put your handy dandy little crank through a slot in the rear bumper and had at it. It was not a decorative accessory.

Let us not forget the delicate little cylinder head gasket.

One little novelty was the included crank. But this I love:

My mother bought one of those pieces of crap when I was in junior high. Brand new, and an instant junker.

I believe a ship carrying hundreds of them to America was turned back in mid-Atlantic because there were so many unsold ones on the dockside in New York, there was no more room.

It is a good thing to be young and fit, those old good years.

Having owned a Morris, a used one, was getting 13 guys inside and going to the carry out to buy fried chicken, carrying bottles of water to fill up the radiator from time to time, this car was the miracle car.

One day a bolt was found under the car when taking it out from the garage. After checking under the vehicle, no signs of a missing bolt was found. weeks later a kind of spring, another bolt, but no way to find out where they came from.

The car run perfect in streets. It was capable to carry heavy weight, it was easy to park everywhere. Finally was taken to a mechanic because a weird sound in the motor area, but the performance was great.

The mechanic reviewed the car, drove the car around and returned back.

He told us that it was impossible that this car was capable to work due to missing parts from the engine.

We showed him the parts we were collecting thru the past weeks and the mechanic laughed like crazy.

The car was fixed and there we went, the engine of this vehicle surviving its best to any kind of treatment.

What a wonderful car until it was stolen. 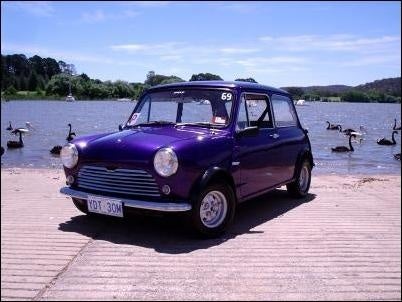