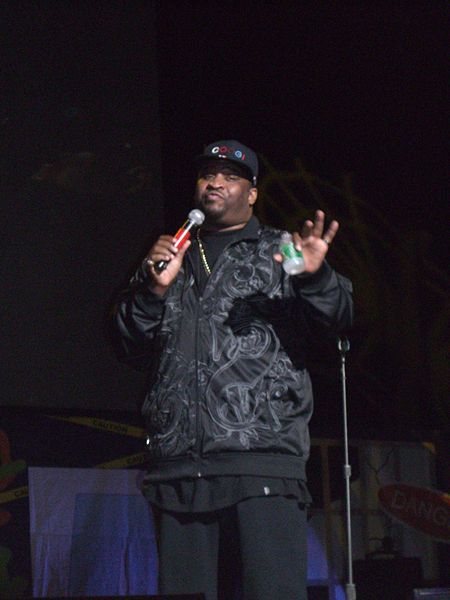 Patrice Lumumba Malcolm O'Neal (December 7, 1969 - November 28, 2011) was an American stand-up comedian, radio personality, and actor. He was known for his cutting, often confrontational crowd work during which he often plays couples against each other. He was a resident of Jersey City, New Jersey. He died on November 28, 2011 following complications from a stroke he suffered a month earlier.

Career
O'Neal began his comedy career in his native Boston. Primarily a stand-up comic, O'Neal made his Def Comedy Jam debut in 2007. He has appeared on Late Night with Conan O'Brien, The Late Show with David Letterman, and The Ellen DeGeneres Show to promote his VH1 series Web Junk 20. He has had half-hour specials on Showtime, HBO (One Night Stand, Def Comedy Jam), and Comedy Central Presents, and has recorded a CD/DVD entitled Patrice O'Neal - Elephant In The Room.

In the late 1990s, O'Neal moved to Los Angeles in order to break into film and television. Limited to guest roles in television and small TV roles, O'Neal has publicly discussed the frustrations and how they took their toll on him: "I'm telling you, if I'd have had a gun back then, I would have shot myself."

O'Neal’s first television appearance was on The Apollo Comedy Hour where he performed his Malcolm XXL bit. From there, he moved on to appearances on Showtime at the Apollo, FNight Videos, and a brief stint as a writer for the WWE. He has appeared in guest-starring roles on MTV’s Apt 2F, Assy McGee, Ed, Z Rock, Yes Dear, Arrested Development, Chappelle Show and The Office. O'Neal was a regular on the Fox series The Jury, and he starred in the Comedy Central animated program Shorties Watching Shorties, along with Nick DiPaolo. He supplied the voice of Harold Jenkins on Noggin’s animated program O'Grady High and was featured as Jesus in Denis Leary’s Searchlight.
In 2005, Patrice filmed a half-hour One Night Stand special for HBO, and shortly thereafter became the first host of VH1's Web Junk 20. O'Neal left the show after two seasons, expressing concerns that the show's audience was too different from his own. In 2006 and 2007 he joined Opie and Anthony's Traveling Virus Comedy Tour, playing large outdoor concert arenas across the country. He has made appearances on Late Night with Conan O'Brien, The Late Show with David Letterman, and The Ellen DeGeneres Show.

Living in the New York area, he performed at comedy clubs in the area, including headlining appearances at Comix comedy club and Caroline's. In February of 2011, Comedy Central aired his first hour-long special, Elephant in the Room. A feature-length version of this special was released on CD and DVD shortly thereafter.

Television
For two years, he was one of five regular guests on Comedy Central's Tough Crowd with Colin Quinn. During Tough Crowd's run, he was also featured in Contest Searchlight along with fellow Boston comedians Denis Leary and Lenny Clarke.

Radio
Since his move to New York in 2002, O'Neal was a regular guest and occasional co-host on the Opie and Anthony program, currently aired on Sirius XM Radio's Channel 105, The Opie and Anthony Channel. He sat in as the program's third-mic when Jimmy Norton was away.

Beginning in March 2006, O'Neal hosted a call-in relationship advice show on XM Satellite Radio, which aired irregularly on Saturday nights on XM's The Virus. Initially promoted as Bitch Management, the show was titled The Black Philip Show, a reference to Dr. Phil. Dante Nero co-hosted, and a rotating cast of female comedians have played third mic. The show aired until the station suspended much of its Saturday night programming due to budget concerns. O'Neal appeared on The Alex Jones Show on September 10, 2010, to discuss politics.

Internet Show and Podcast
Patrice O'Neal started a web series and podcast called The Patrice Oneal Show - Coming Soon! showing various episodes as of May 15, 2007. He performed with a five-person group—Bryan Kennedy, Dante Nero, Vondecarlo Brown, Harris Stanton and Wil Sylvince—touching on many fictional scenarios. The show was produced by For Your Imagination[4] and can be found on O'Neal's website. He guest-starred in another For Your Imagination-produced show, called Break a Leg, playing Adult-Sized Gary Coleman.

Death
On October 26, 2011, it was announced on The Opie and Anthony Show that O'Neal, a diabetic, had suffered a stroke on October 19.

On November 29, 2011 it was announced by fellow comedian and friend Jim Norton on The Opie and Anthony Show that O'Neal died from complications following the stroke he suffered a month earlier.