Anyone else using Google+ on a2k yet?

What do you think of it so far?
2 Replies
1
Thu 21 Jul, 2011 07:44 pm
@sozobe,
It's like a cleaner more usable Facebook with non-mutual follows. The circles implementation is nice for sharing with smaller circles but currently doesn't do much to help you manage your perusal with them as filters (i.e. you have only global stream then circles, but you can't do things like exclude a certain circle from the default stream etc right now).

The hangouts are probably the biggest new thing they bring to the table, it's certainly the best major implementation of video chat but I've only played with that with Nick a bit and probably won't use it till more folks I know offline are on there.
1 Reply
1
Thu 21 Jul, 2011 07:56 pm
@sozobe,
This photo sums up part of what I want: a cross between following people and subject matter (e.g. a lot of people I follow for only a subset of what they say). 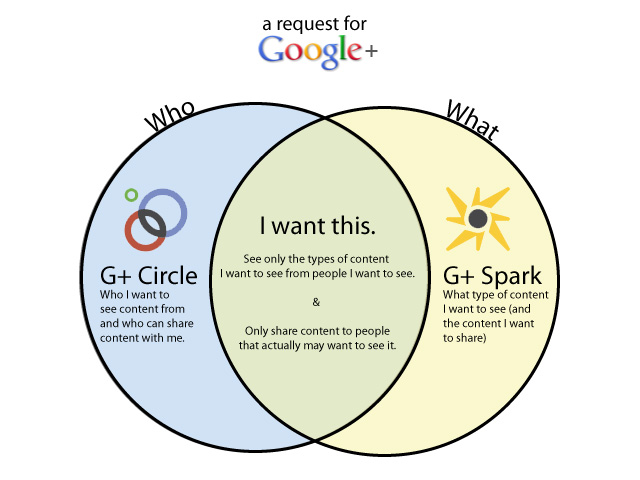 1 Reply
2
Thu 21 Jul, 2011 07:56 pm
@Robert Gentel,
I'm most interested in tailoring output -- there are people who are very interested in what the kid has been up to and those who couldn't care less, those who are local and so would like to know about the great new restaurant and those who live on the other side of the world, etc.

Plus tone stuff. (There are things I'd say to my queer activist/ burlesque performer/ highly inappropriate but hilarious friend H that I would not say to my 12-year old niece. Though I am happy to be friends with both.)
1 Reply
1
Thu 21 Jul, 2011 07:56 pm
@Robert Gentel,
Cool.
0 Replies
1
Thu 21 Jul, 2011 08:14 pm
@sozobe,
For those scenarios it's a great match. For me, there's little I'd want to say to more than one person that I wouldn't want to say to everyone so the problem for me is that I want people to be able to filter that better.

For example, most of my close family and friends aren't interested in certain tech subjects, but they aren't posts I want to hide from the public, just subjects that I want those who follow me to be able to exclude. It'd be tough to pull off, but my holy grail is to be able to better filter by subject. I'd love to be able to post all the geek crap I want to geeks and not make friends want to unsubscribe but at the same time I want the posts to be publicly accessible (anything you post to a circle is not public).

If your social graph moves over there I think the circles concept would work very well for your use case though. That remains to be seen (whether it will go mainstream like FB) but it's past 20 million users already without being fully open.
0 Replies
1
Thu 21 Jul, 2011 08:40 pm
@Robert Gentel,
I haven't gone that route yet. It sounds complicated.

BTW, I hate Facebook. Hate it with a passion and go there only if I get an e-mail telling me someobody's been writing on my wall or something like that.
0 Replies
1
Thu 21 Jul, 2011 09:14 pm
@Robert Gentel,
I've been on it for a few days now. First impressions:
1) The interface is clean and showcases Google's ongoing commitment to user experience research.
2) The circles are essentially what Facebook groups tried to be minus the extra steps.
3) The ease of adding/separating known email addresses from my address book into the various circles is a nice touch.

2) The circles are essentially what Facebook groups tried to be minus the extra steps.

I dunno how it works yet.

Can anyone explain
the results of adopting Google + ??

Michael Hunt is no longer welcome on Google+ - Discussion by maxdancona
Hide Followers on Google plus - Question by Annushka
Google Warns Local Businesses: You Have 3 Weeks to Save Your Places Listing - Question by Brown Antony Cruz
WhyI despise Google Chrome - Discussion by Lustig Andrei
How Can I get google +1 votes? - Question by abhisoft
Copyright © 2021 MadLab, LLC :: Terms of Service :: Privacy Policy :: Page generated in 0.03 seconds on 08/02/2021 at 01:38:41
▲ ▼