Plurals
You pluralize a proper noun the same way you would pluralize any word--add s or es.

Note: If a proper name ends in a y, don't make the plural ies.

Plural Possessives
Here again, the same rules apply to proper nouns as to any other noun--s apostrophe or es apostrophe.

There are a few exceptions. When are there not in English? The possessive form of Jesus and Moses take an apostophe only:

Worth while getting up in the middle of the night? :wink:
(I mean, besides of the experience, of being the second of two US-nights owls online here.

This keeps up my mood for the whole day, Andrew (and I share the compliment gladly with Roberta :wink: ).

What is the IRS's position on this issue?

There are a few exceptions. When are there not in English? The possessive form of Jesus and Moses take an apostophe only:

See my response in a related thread: the "exception" to the rule regarding the formation of possessives for "classical" names ending in -us or -es is weird and inexplicable. They make baby Jesus weep. The proper form of the possessive of "Jesus" is "Jesus's," the proper form of the possessive of "Moses" is "Moses's."
0 Replies
1
Reply Mon 12 Jan, 2004 09:51 am
At least some American online grammars say that (additional to Jesus and Moses) Zeus, Sokrates and Xerxes should be formed with an apostrophe only.

While this is from a German university's English department

For singular proper nouns ending in s, stylists differ. Some use a style similar to German and simply add an apostrophe (Camus' novel, King Charles' crown). This is allowed by the department and is undoubtedly easier for students to follow. However, the general convention in English--both in American and British usage--is to add an apostrophe and an s (King Charles's crown, Texas's weather, Marx's ideology). The MLA Handbook suggests doing this in all cases, whereas many style books make exceptions for the names Jesus and Moses, for polysyllabic Greek names ending in es, and for any instance where an apostrophe alone more accurately reflects pronunciation (Jesus' ministry, Moses' leadership, Aristophanes' plays, Camus' novel).

this comic is from the Guardian: 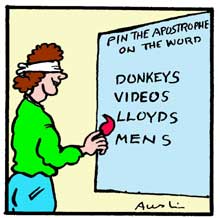 What's the rule on the possessive of acronyms ending in the letter "S" (like "IRS")? Should it be:

What is the IRS's position on this issue?

What is the IRS' position on this issue?

For singular proper nouns ending in s, stylists differ. Some use a style similar to German and simply add an apostrophe (Camus' novel, King Charles' crown).

Joe, Don't shoot the messenger. I'm only relating what's in the Chicago Manual of Style. I agree with you, btw.

Joe, Don't shoot the messenger. I'm only relating what's in the Chicago Manual of Style. I agree with you, btw.

No disrespect to you, Roberta, just offering a dissenting opinion. I am, in general, loath to criticize anything that has brought such international renown to my city, but, in this case, the Chicago Manual of Style is a ass.
0 Replies
1
Reply Mon 12 Jan, 2004 10:33 am
Joe, The CMoS has been a ass more than once. This is just another of those times. I have to get the latest edition. Maybe it's been deassified.
0 Replies
1
Reply Mon 12 Jan, 2004 10:48 am
Joe

It may offer you some comfort to know that even Germans have problems with the genitive. A common error made by native-speakers of German is to use an apostrophe - English-style - in possessive forms. For instance, they will often write "Karl's Buch" instead of the correct form, "Karls Buch." Some observers claim this is an influence of English, but it is an influence that is often seen on store signs and even on the sides of trucks in Austria and Germany.

For non-Germans, there are other genitive

Seriously, generally and grammatically you are correct ... nearly :wink:

Names add -s (no apostrophe!) in the genitive, regardless of gender or number; if the name already ends in an -s or -z, only an apostrophe is added. Martines Jacke, Hans' Handschuhe, Müllers Auto. Names of people precede the noun possessed, other names typically follow: die Zukunft Europas.
Source: German Case Forms Reference