Police have confirmed the blasts, but not yet said if they were caused by bombs. There have not been any major bomb blasts in Indonesia for several years, and this month the country's presidential election passed off peacefully.

"There were explosions heard from two separate places, one the JW Marriott, the other in the Ritz Carlton. We are still trying to check because right now we are still helping the victims," said South Jakarta Police Chief Firman Santyabudi.

Witnesses at the scene told Metro TV that the injured, including Indonesians and foreigners, were seen being taken away in ambulances.

"Some windows of the Ritz-Carlton building have been shattered, mostly on the lower section. I'm looking at it from my office," said Myra Junor, who works at a nearby building.

The Marriott Hotel was badly damaged by a car bomb attack in 2003 that killed 12 people.

That coincided with a period when Islamists militants carried out numerous attacks, including bombings in Bali in 2002 that killed 202 people. Many militants have since been arrested.

It's still not clear who (or what group) is responsible for these bombings. But one thing's for sure ... Indonesia does not want or need any more episodes like this. (Assuming "terrorists" are involved). In the recent election Indonesians (one of the largest Muslim populations of any country in the world) voted in a moderate government & clearly & strongly rejected more "radical" alternatives. I think the results of the elective became "official" today. Maybe there's some connection? Who knows?

No claim of responsibility

No one has claimed responsibility for Friday's blasts, which are the first attacks on high-profile targets in the country in several years and come just a week after Susilo Bambang Yudhoyono was returned to power in presidential elections that passed of peacefully.

The blasts mark the second attack on the Jakarta JW Marriott, which was hit by a suicide bombing in 2003 that left 12 dead and injured more than 150.

That bombing and several other high profile attacks before that had been claimed by or blamed on the Jemaah Islamiyah (JI) group, and many suspected members have since been imprisoned.

An Australian security report released on Thursday warned, however, that Jemaah Islamiyah could be poised to strike again.

Leadership tensions in the group and recent prison releases of several members raised the possibility that splinter groups might now seek to re-energise the movement through violent attacks, the report by the Australian Strategic Policy Institute said.

Australia's government issued a fresh travel warning for Indonesia on Friday after the attacks, telling citizens to "reconsider your need to travel to Indonesia, including Bali, at this time due to the very high threat of terrorist attack". 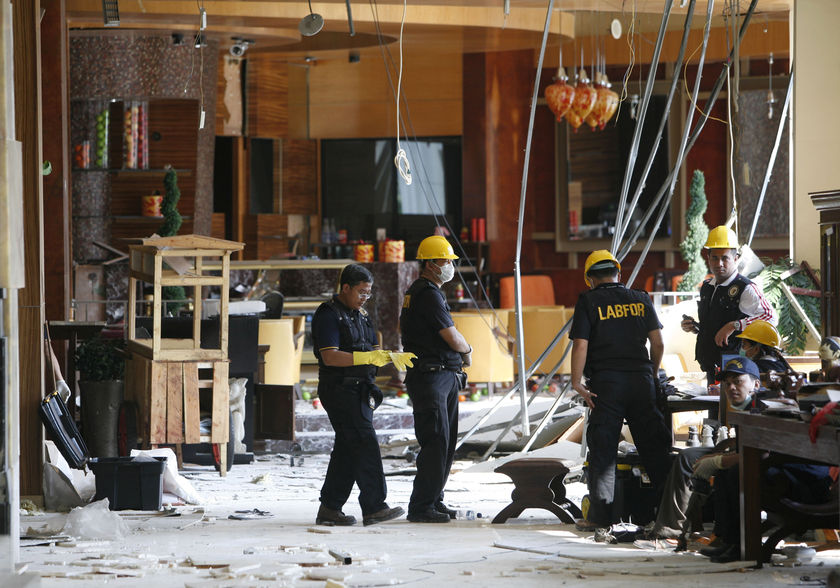 Indonesian police have confirmed Jemaah Islamiah (JI) as the culprits behind the blasts at Jakarta hotels and are determined to hunt down the extremist who leads a violent splinter faction of the group.

They have also identified one of the two suicide bombers who targeted the JW Marriott and Ritz-Carlton hotels in which nine people were killed and 55 injured.

"We confirm that the attackers are from Jemaah Islamiyah because there are similarities in the bombs used," national police spokesman Nanan Soekarna told a press conference.

He said an exploded bomb left in a guestroom of the JW Marriott, which was attacked along with the nearby Ritz-Carlton, resembled devices used in Bali and one discovered in a recent anti-JI raid on an Islamic boarding school.

"They are from the same school. We found similar tools, similar materials and similar methods," he said.

Indonesian foreign ministry spokesman Teuku Faizasyah says it is hoped that in the days ahead authorities will be able to catch Malaysian-born Noordin Mohammed Top and those who support him.

"We haven't been able to catch him in the past. He has a kind of network that assists him in disguising," he said.

"We are determined to find him and unravel his network. We have full confidence in our national police, and their strong determination to catch Noordin Top."

It is the fourth attack in Indonesia allegedly masterminded by Top after bombings at the Jakarta Marriott in 2003, the Australian embassy in 2004 and Bali restaurants in 2005, which have killed more than 40 people.

He is a violent jihadist, a master bomb-maker and the leader of the most extreme splinter group of the Jemaah Islamiah (JI) terror network blamed for the 2002 bombings of nightclubs in Bali, which killed 202 people.

Police have identified one of the two suicide bombers who targeted the hotels during the breakfast period Friday when they were packed with foreign businessmen and diplomats, national police spokesman Nanan Soekarna told reporters.

"Following the preliminary results of facial reconstruction, both suicide bombers are male," he said, quelling speculation that a woman was involved.

"One of them has been identified. I cannot tell you his complete name but he has the initial 'N'. And another body is still in the process of identification."

Investigators say the bombers stayed in Room 1808 of the Marriott for two nights before the attacks and disguised themselves as guests when they walked into crowded dining and meeting areas and detonated their suitcase devices.

The bombs - brought into the hotels despite airport-style security measures - were packed with metal nuts to maximise the carnage.

Local media in Indonesia has reported that metal detecters went off in one of the hotels on Friday after a bomber entered, however security guards still allowed entry.

The Indonesian security ministry's anti-terror desk chief, Ansyaad Mbai, said the advanced skills and planning used to pull off the blasts at the luxury hotels - among the most tightly guarded buildings in Indonesia - were extremely disturbing.

"Their new skills and advanced tactics, enabling them to smuggle the explosives into the targeted site, pose a very serious threat for our country," he said.

"While they previously detonated the bombs from outside of the targeted place, now they managed to smuggle the bombs into the hotel and stayed several days in the hotel room where they planned the attacks.

"Nobody can predict terror attacks. What we can do is to review our security system to get a more effective approach."