Giving up my iPod for a Walkman

Giving up my iPod for a Walkman

When the Sony Walkman was launched, 30 years ago this week, it started a revolution in portable music. But how does it compare with its digital successors? The Magazine invited 13-year-old Scott Campbell to swap his iPod for a Walkman for a week.

My dad had told me it was the iPod of its day.

He had told me it was big, but I hadn't realised he meant THAT big. It was the size of a small book.

When I saw it for the first time, its colour also struck me. Nowadays gadgets come in a rainbow of colours but this was only one shade - a bland grey.

1: Clunky buttons
2: Switch to metal (that's a type of cassette, not heavy rock music)
3: Battery light - usually found flickering in its death throes
4: Double headphone jack (not to be found on an iPod)
5: Door ejects - watch out for flying tapes and eye injuries

So it's not exactly the most aesthetically pleasing choice of music player. If I was browsing in a shop maybe I would have chosen something else.

From a practical point of view, the Walkman is rather cumbersome, and it is certainly not pocket-sized, unless you have large pockets. It comes with a handy belt clip screwed on to the back, yet the weight of the unit is enough to haul down a low-slung pair of combats.

When I wore it walking down the street or going into shops, I got strange looks, a mixture of surprise and curiosity, that made me a little embarrassed.

As I boarded the school bus, where I live in Aberdeenshire, I was greeted with laughter. One boy said: "No-one uses them any more." Another said: "Groovy." Yet another one quipped: "That would be hard to lose."

My friends couldn't imagine their parents using this monstrous box, but there was interest in what the thing was and how it worked.

In some classes in school they let me listen to music and one teacher recognised it and got nostalgic.

It took me three days to figure out that there was another side to the tape. That was not the only naive mistake that I made; I mistook the metal/normal switch on the Walkman for a genre-specific equaliser, but later I discovered that it was in fact used to switch between two different types of cassette.

Another notable feature that the iPod has and the Walkman doesn't is "shuffle", where the player selects random tracks to play. Its a function that, on the face of it, the Walkman lacks. But I managed to create an impromptu shuffle feature simply by holding down "rewind" and releasing it randomly - effective, if a little laboured.

I told my dad about my clever idea. His words of warning brought home the difference between the portable music players of today, which don't have moving parts, and the mechanical playback of old. In his words, "Walkmans eat tapes". So my clumsy clicking could have ended up ruining my favourite tape, leaving me music-less for the rest of the day.

Throughout my week using the Walkman, I came to realise that I have very little knowledge of technology from the past. I made a number of naive mistakes, but I also learned a lot about the grandfather of the MP3 Player.

You can almost imagine the excitement about the Walkman coming out 30 years ago, as it was the newest piece of technology at the time. 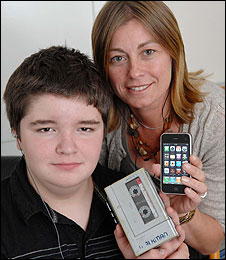 The Walkman was a nostalgic sight for Scott's parents

Perhaps that kind of anticipation and excitement has been somewhat lost in the flood of new products which now hit our shelves on a regular basis.

Personally, I'm relieved I live in the digital age, with bigger choice, more functions and smaller devices. I'm relieved that the majority of technological advancement happened before I was born, as I can't imagine having to use such basic equipment every day.

Having said all that, portable music is better than no music.

Now, for technically curious readers, I've directly compared the portable cassette player with its latter-day successor. Here are the main cons, and even a pro, I found with this piece of antique technology.

This is the function that matters most. To make the music play, you push the large play button. It engages with a satisfying clunk, unlike the finger tip tap for the iPod.

When playing, it is clearly evident that the music sounds significantly different than when played on an MP3 player, mainly because of the hissy backtrack and odd warbly noises on the Walkman.

The warbling is probably because of the horrifically short battery life; it is nearly completely dead within three hours of firing it up. Not long after the music warbled into life, it abruptly ended.

With the plethora of MP3 players available on the market nowadays, each boasting bigger and better features than its predecessor, it is hard to imagine the prospect of purchasing and using a bulky cassette player instead of a digital device. 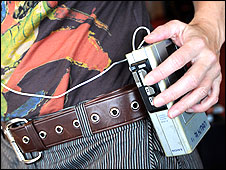 Music on the move

Furthermore, there were a number of buttons protruding from the top and sides of this device to provide functions such as "rewinding" and "fast-forwarding" (remember those?), which added even more bulk.

As well as this, the need for changing tapes is bothersome in itself. The tapes which I had could only hold around 12 tracks each, a fraction of the capacity of the smallest iPod.

Did my dad, Alan, really ever think this was a credible piece of technology?

"I remembered it fondly as a way to enjoy what music I liked, where I liked," he said. "But when I see it now, I wonder how I carried it!"

But it's not all a one-way street when you line up a Walkman against an iPod. The Walkman actually has two headphone sockets, labelled A and B, meaning the little music that I have, I can share with friends. To plug two pairs of headphones in to an iPod, you have to buy a special adapter.

Another useful feature is the power socket on the side, so that you can plug the Walkman into the wall when you're not on the move. But given the dreadful battery life, I guess this was an outright necessity rather than an extra function.
Type: Discussion • Score: 11 • Views: 16,614 • Replies: 15
No top replies
1
Reply Mon 29 Jun, 2009 10:14 am
@djjd62,
The Walkman player I had was barely bigger than the cassette itself -- a triumph of miniaturization and I had the gadget for many years. I also bought a DBX portable player to play the DBX cassettes I had made from LP's and FM radio. It's noise reduction and dynamic range compression/expansion was 2:1 instead of the measly 20% offered by Dolby (in the improved Dolby2, only the high end was compressed and expanded). Then the first CD portable Walkman came out and it was huge with six D cells batteries running it. It unfortunately conked out before the year warranty and I got a credit towards buying the CD Walkman which was also barely larger than the software and I still haven't gone MP3 -- I have a Panasonic CD player. I suppose the shirt pocket portability of the MP 3 players and huge library one can download is it's redeeming feature but my old Sony 10 Walkman was also shirt pocket portable, but, of course, you had to also carry a cassette wallet loaded up with favorites.

The I Phone and it's Sony (and other brands) competitors is really the only portable gadget which I would buy. 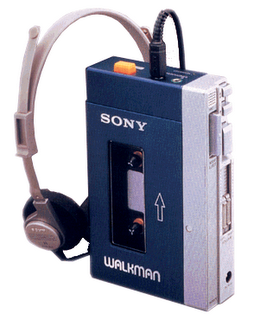 the last was similar to this one also have a mini disc player


Listen old man, be careful what you say on these phones. Our signal could be picked up, and our devisous plan to control the stock market will be found out.
Hello?
Hello?

C'mon...c'mon....just talk a little bit more and I'll have your coordinates....
heh...they don't realize the sophisticated hands free devices us secret agents have access to.... 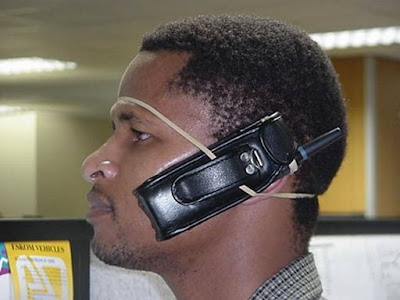 I know how I can drive and talk hands free now Chai. Thank you. You are indeed - brilliant
0 Replies
1
Reply Mon 29 Jun, 2009 12:01 pm
I recall the days even before Walkman's when we had to walk around with transistor radios with the single ear attachment. I thought even that was cool! Back in those days you could get 10 songs on a cassette or LP. Today you can get 1,000 songs on something as small as a credit card.
0 Replies
1
Reply Mon 29 Jun, 2009 12:30 pm
This is something as close to the WM 10 I owned as possible in all metal gold and silver:

I did, however, have one of the first VCRs that came out. I remember paying something close $1300 for it!

The interface can't get much smaller or it won't be usable by adult fingers and eyeballs. But the interface can get more flexible. I'm guessing that flexi-touch-screens rolled up in tubes will be the primary portable interface for everything. Either that or screens will go away completely and everything will be done on a heads-up display which is holo-projected onto special sunglasses so that the wearer never has to look away from the interface. And we thought "Texting" was bad for driving...

Music will be downloaded (along with the software to play, find and organize it) directly into our cortical implants-- which of course will be controlled by our thoughts (the most natural interface imaginable).

My prediction for the future... the "device" will go away completely.

Music will be downloaded (along with the software to play, find and organize it) directly into our cortical implants-- which of course will be controlled by our thoughts (the most natural interface imaginable).