Forums: Shewolf Photos, Graduation Signatures 1886, Handwriting, Graduation Notes, Scrapbooking
Email this Topic • Print this Page
Reply Tue 30 Dec, 2008 10:32 pm
I am leaving the majority of the photos as they came out of the camera. So I apologize if they are too underexposed for you to read the writing that is in them.
Leaving these photos dull, worn out and dingy ... helps to explain this book.
Besides, I have a lot of Irish Creme on board... Im a bit lazy right now...

While going through Ruby's things ( Jillians Great grandmother) I found this worn.. velvet looking book that I scooped up to look at later.

Once I opened it.. I honestly fell in love.

This was... Minnie's .. graduation book.

Who is Minnie? My very first question!

Honestly.. I have no clue.. But given the dates, and the time that Ruby was born I will assume from here on out that Minnie is Ruby's mother. Though do understand, I have no proof of that.
Ruby died a couple of years ago to what I believe is a case of undiagnosed Crones disease. All the side effects Noddy had, and then some. Though Ruby refused to see a doctor, we all knew something was wrong. We finally had to get her to a nursing home because she could no longer even walk to the bathroom on her own and jillian was less then one year old. I could not take care of her safely and take care of Jillian.
She died about 3 weeks after she was admitted.

I miss that woman.

She had a VERY unique smell to her that I often get a whiff of in Jillians room.

Her family was a some what well to do family. Not filthy rich by any means.. but were well off enough to have retirement funds, college funds, vacation funds etc. With their income level I would guess them to have been about upper middle class in todays society.

Ruby, once she was an adult, left home to go to school.
A quick story from her explained to me one day that she lived in a tent during the depression. She never spoke more of it.

then I find this -

In this book, I read many notes to Minnie. Many short poems and hand drawn images.. hand painted flowers.. and even preserved roses and lillys from Minnies graduation.

The handwriting is impeccable.

I can almost SEE thier physical poise.. their dress.. their manners...
I can hear their way of speaking.

Their words are as deliberate as the action of forming each of their letters.
It is almost as if their own handwriting is seen as a work of art... a reflection of them.. 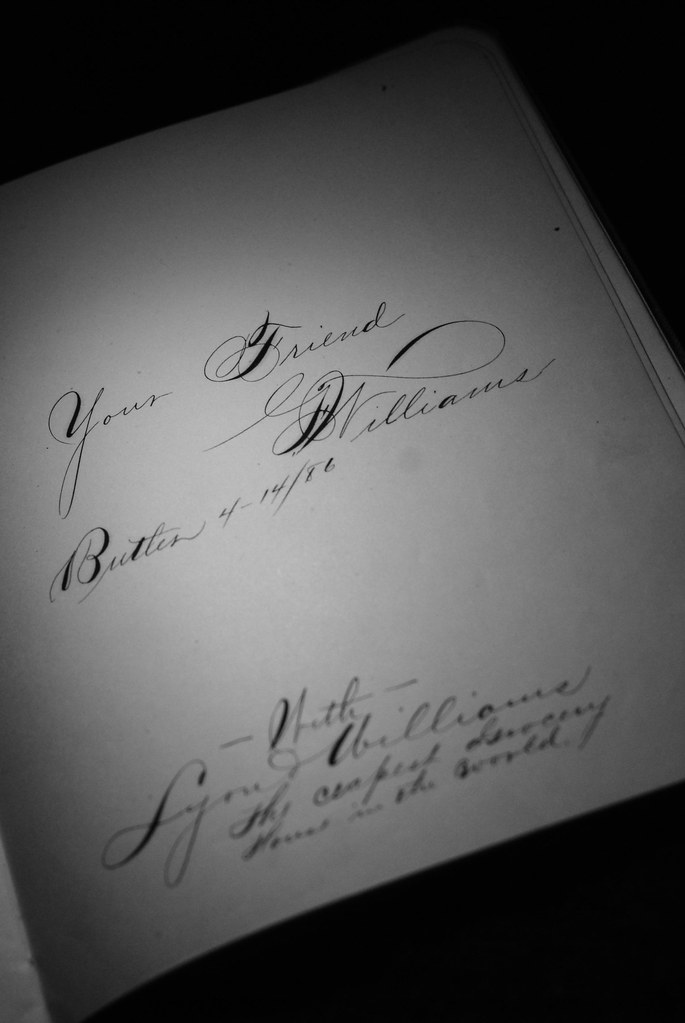 There were a few that I had to raise the contrast on so that you could even SEE the writing on the page.
Some of these are so faded, if it were not for being able to feel the dents in the paper, I may not have known there was writing.

This one is one of my favorites.
It isnt 'fancy' like the others.. it is simple writing.. simple meaning..
You really get the idea that THIS may have been one of Minnies really close friends..

This is easily one of the most beautiful things I have ever had the pleasure to read.

a grand new year to you and the beaner.

I should write out what some of them say. No one speaks that way anymore. It makes me wonder if what they wrote was common spoken word? or just words they chose for the book..
0 Replies
1
Reply Wed 31 Dec, 2008 08:00 am
That is gorgeous, shewolf! What a fun thing to find.

I've long had a fascination for handwritten things, it's like finding little ghosts. With computers everywhere it's hard to come by handwriting anymore; things like your book are so comforting.

It would be cool if you could trace some of the people who signed it.
0 Replies
1
Reply Wed 31 Dec, 2008 08:06 am
I have thought about that as well.
I wonder who they married, where they moved to.. what happened to them.. etc

that would be neat to find their families . They should all be dead by now ( the people who signed the book) but there may be someone alive who actually MET them and spent time with them
1 Reply
1
Reply Wed 31 Dec, 2008 08:36 am
@shewolfnm,
Sounds like the makings of a good novel. Start writing, Missy.
1 Reply
1
Reply Wed 31 Dec, 2008 08:56 am
@Butrflynet,
It is beautiful - I love that handwriting - I love the idea of all the people who had a part in it and what their story was - I am with Butrflynet - good fodder for a book!
0 Replies
1
Reply Wed 31 Dec, 2008 10:00 am
On a similar note, there's a wonderful book you might be interested in reading called The Cure for Death by Lightning... it's by Gail Anderson-Dargatz, a Canadian writer. She is writing as the daughter of a woman who kept a scrapbook full of all kinds of interesting things, including recipes (the "cure for death by lightning" being one of them)... and as she goes through the pages after her mother's death, she reminisces. It was a pretty good read.
0 Replies
1
Reply Wed 31 Dec, 2008 10:32 am
When my maternal great-aunt died, my mother found her autograph book amongst her things. It had signatures from people like my great-grandmother. My father scanned a number of the pages, and we buried the book with Aunt Ethel. I think it was a symbol of one of the happier times in her life. The writing was not as flashy as this (the book was from the 40s) but I definitely see similarities.
1 Reply
1
Reply Wed 31 Dec, 2008 10:53 am
@jespah,
My grandma had one, too, in which many people did little paintings - they ran with a rather "cultured" crowd. There were many painters in our family and some of her and her parents' friends were musicians, writers, and poets. She was born in 1908 and got the book when she was 8 yrs old, so from 1916 onwards, people wrote in it, including her children when they were young. Interesting

We all had autograph books, too. It was the rage at that time, along with charm bracelets

It seems as though this book started with a college graduation... and was added to afterwords. Maybe by the same friends as time went on because some of the writing is identical with later dates. Some of the names are written the same too, though with different last names.

Theb ook is too frail to scan sadly. Every time I turn a page, something cracks no matter how careful I am. 2 pages fell out while I was simply propping the book under a lamp for photos.

I will try to read and post the words...but that will have to be a bit later on.
Im taking little Miss roller skating

I guess I forgot to upload that photo.

The opening page has the initials MT painted in flowers then there is a signature boxed in by what looks to be a rose vine
There are 2 preserved flowers inside of the book as well. One I think is a Lilly , with skin like the IceMan , and the other is a rose pressed in waxpaper
0 Replies
1
Reply Wed 31 Dec, 2008 11:00 am


This is part of why I save really old postcards that I've found in old fashioned bookstores and antique shops. Some of the writing and the messages are fabulous, and the images on the fronts of the cards often interesting photographs.
1 Reply
1
Reply Wed 31 Dec, 2008 06:44 pm
@ossobuco,
I do not think, except in grade school, I have ever paid this much attention to handwriting.

I have tried to mimic what I see in this book and simply can not.

I can not imagine an entire hour a day ( in school) devoted to only handwriting.

My mother and I talked on the phone about this book.
When she was in grade school (late 50's) they would practice perfect circles connected in lines over one whole page. This was to exercise your hand and teach you control over your writing tool.

An hour.. of circles... every day..
2 Replies
1
Reply Wed 31 Dec, 2008 07:33 pm
@shewolfnm,
I spent some time years ago with a quill pen (something like 29 cents then), and some time learning calligraphy, and years before that, learning the Palmer method of handwriting. Have played with sumi ink drawing. So.. I don't find this kind of penmanship impossible. I got tired of seeing perfect Palmer method, probably around the sixties, and enjoyed the development of more idiosyncratic writing styles. Not that I think of this writing you show as Palmer method - just saying, they taught and drummed in penmanship back then. My uncle Charlie, a tool and dye guy, had gorgeous writing, though he was probably just born when the writing you show was writ...

But now, very precious..
0 Replies
1
Reply Wed 31 Dec, 2008 07:44 pm
@shewolfnm,
Snort, I was in grade school in the late forties (I'm sooooo old). Yes, we practiced and practiced. My own writing has been a matter of controlling a rampant lion. I can have good penmanship for seconds at a time, but I get bored easily, especially as years go by. My last best efforts were in drafting lettering, at which I'm a whiz once I get going, which is less and less useful now.

I near cried when I saw a set of drawings for a public housing project built, I think, in the late twenties in my last home town. Totally gorgeous drawings, incredible details. I couldn't keep the drawings (back to the agency) but made a few small copies of details. Such intensity.
0 Replies
1
Reply Thu 1 Jan, 2009 08:12 pm